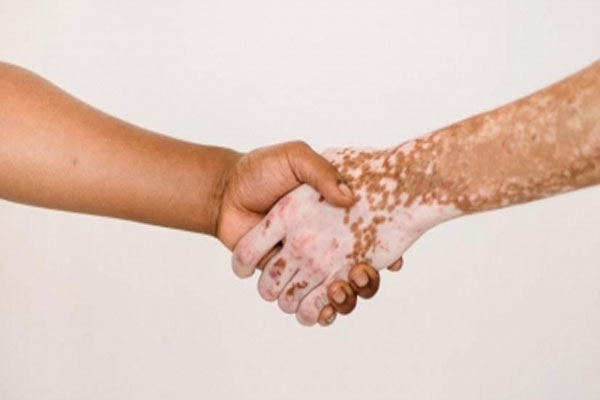 New Delhi: Vitiligo is a chronic skin condition that causes pale white patches to appear on the skin. A lack of Melanin, which is a pigment found in the skin causes Vitiligo. Although vitiligo can affect any part of the skin, it is most common on the face, neck, hands, and skin creases. It can also begin in the lips, tips of fingers, and genital areas.

Vitiligo affects people of all skin colours, but it may be more visible in people with dark skin. This disorder is not fatal or infectious, and while it is classified as an autoimmune disorder, it is rarely associated with problems in other endocrine organs such as the thyroid or adrenal glands. The appearance of vitiligo, on the other hand, can cause stress and low self-esteem. It’s difficult to predict how this disease will progress. Without treatment, the patches may stop forming. In most cases, pigment loss spreads to cover the majority of the skin. In rare cases, the skin regains its colour.

. The symptoms of vitiligo can appear at any phase of life. The signs include:

. Early paling of your body hair, including hair on the lashes brows and face if the areas are involved.

. Mostly it is asymptomatic and there are no symptoms like itching or pain.

Following a skin examination, a dermatologist will be able to detect vitiligo. In order to rule out other skin conditions, the doctor will look for symptoms associated with them, such as other hypopigmentary disorders like common eczemas or healing psoriasis lesions. The doctor will most likely examine every area of your skin to determine which type of vitiligo you have based on where the patches appear. Patches are easy to spot on dark skin.

However, because there is less distinction between affected and unaffected skin in lighter-skinned people, the doctor may use a tool called a Wood lamp (which emits ultraviolet light). Under this type of light, vitiligo skin will appear different. The application can also be used to differentiate between loss of pigment and reduction in colour.

The appearance of lightened patches and the patient’s medical history are sufficient to diagnose vitiligo. Doctors may, however, recommend additional tests for confirmation. A skin biopsy, for example, will reveal whether or not melanocytes are present. The absence of melanocytes can be used to confirm a vitiligo diagnosis.

A skin biopsy can also reveal whether the patient has hypopigmented cutaneous T-cell lymphoma, a type of skin cancer. A blood test is frequently recommended by doctors to determine whether the vitiligo is caused by an underlying autoimmune disease, such as anaemia or type 1 diabetes. Because of the association with other autoimmune diseases and endocrinopathies, patients with suggestive signs or symptoms may require additional testing to rule out an underlying condition. Thyroid disease, diabetes mellitus, pernicious anaemia, Addison disease, and alopecia areata have all been linked to vitiligo.

Although there is no cure for vitiligo, proper treatment can halt or slow the discoloration process and restore some colour to the skin. The procedures’ goal is to achieve an even skin tone by either restoring colour (repigmentation) or removing the remaining colour (depigmentation). Some of the most common treatments for vitiligo include camouflage therapy, repigmentation therapy, light therapy, and surgery.