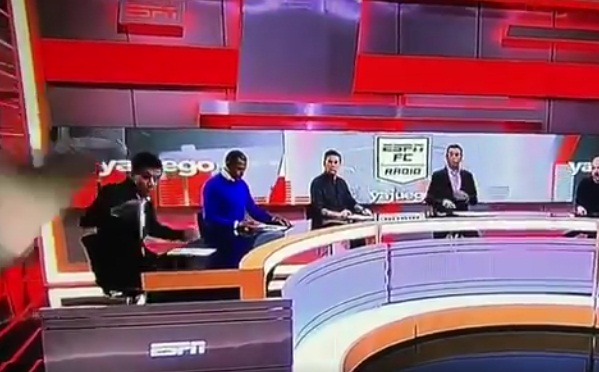 Bogota (Colombia): A television anchor in Columbia came out without any major injuries after a part of the studio set collapsed on him during a live show. A video of the incident went viral on the internet.

ESPN Colombia’s anchor Carlos Orduz was part of live discussion. Suddenly a huge structure, perhaps a huge monitor, fell on him. Orduz was lucky enough to avoid major injuries but got a bruise and a blow to the nose.

The incident was recorded on camera, showing Orduz hunched upon the desk after the structure fell on him.

The camera quickly cut out of the shot and the host of the show called for a commercial.

“To those who wrote to me and greeted me about the accident last night, I must tell you that I am fine thank God after the medical check-up, the respective examinations, any issue was ruled out, only a bruise and a blow to the nose (no fracture). Greetings and thanks,” he wrote in Spanish on Twitter after the incident.

Orduz also posted a video message on Twitter after the incident, stating that he was doing fine.