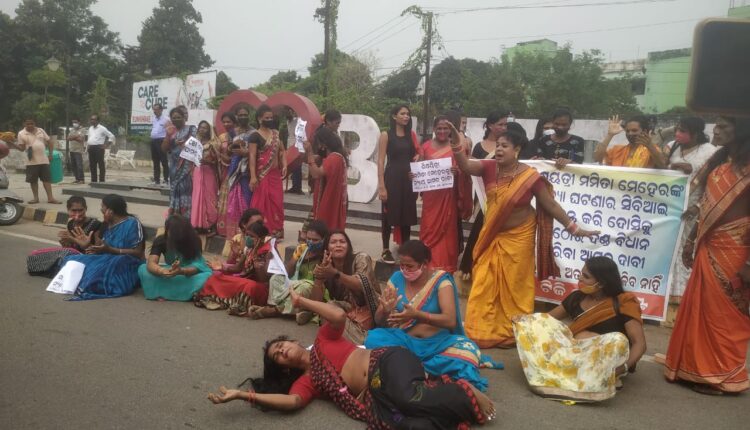 Bhubaneswar: After opposition parties, transgenders have taken up the sensational Mamita Meher murder case and hit streets in the state capital demanding action against Minister of State (MoS) Home Dibya Shankar Mishra for his alleged involvement in the incident.

Seeking justice for the 24-year-old deceased schoolteacher of Sunshine Model School at Mahaling in Kalahandi district, the transgenders sat on a dharna at Master Canteen Square here. Holding placard and shouting slogans, the eunuchs also burnt effigies of the concerned Minister and police as part of their protest.

They demanded that a CBI probe be conducted into the murder case and stern action against all those involved in the incident. The  TG Surakhya Trust also demanded resignation of Minister Dibya Shankar Mishra on moral grounds.

Besides, All India Democratic Students Organisation (AIDSO) also staged a protest over the incident.

Meanwhile, a 3-member central team of BJP has arrived in Nuapada from Raipur. The team will meet family members of Mamita Meher at Jharni village in Balangir district later in the day.

On October 19, body of Mamita, who had gone missing since October 8, was exhumed from underground of Mahaling stadium in the presence of police. Hours after, police arrested main accused Govind Sahu, who had absconded from police custody on October 17 night. During interrogation, he had confessed to his crime.

All accused in Mamita Meher murder case should be hanged:…