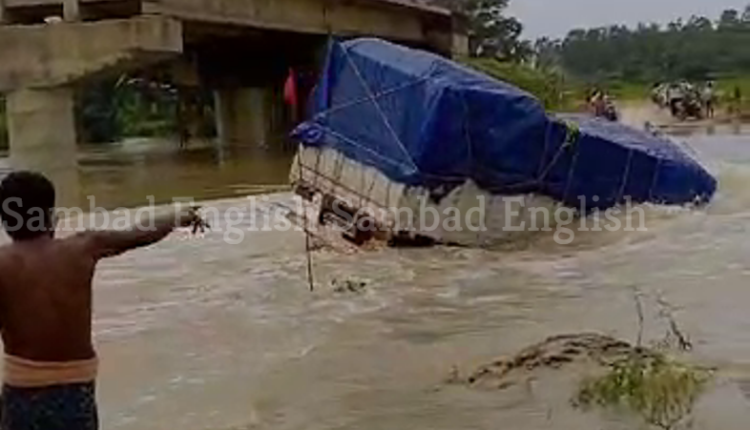 Keonjhar/Baripada: Incessant rains claimed lives of two motorists in different parts of Odisha. In Karanjia of Mayurbhanj district, a 16-wheel truck overturned on NH-49 while crossing Baitarni river near Chadehibhol.

As a bridge over Baitarni river was under construction near Chadehibhol, the semitrailer was moving on a temporary road constructed on the riverbed when a strong current of water hit the vehicle and overturned it.

Driver of the semitrailer truck died on the spot, while its helper went missing. The driver’s dead body remained unattended for long hours on the NH-49. After the water receded in the river, police with the help of locals retrieved the body from the truck.

In another incident, police recovered a Tavera car and a person’s body from Janjali nullah near Panasdiha under Anandpur police limits in Keonjhar district today.

Decomposed bodies of man, woman wrapped in sack recovered in…

Locals said the car tried to cross a culvert overflowed with water yesterday. But, the car got swept away with the strong current of water and fell into the nullah. Today, locals initially spotted the vehicle and the body being stuck in a tree and informed the police.

Similarly, a paddy-laden mini truck was swept away in Swamapatana nullah in the district when the vehicle tried to cross it. Even though locals asked the driver not to cross the overflowing nullah, he did not oblige.

While crossing the nullah, the mini truck fell into deep water and swept away. Locals later managed to rescue the driver.