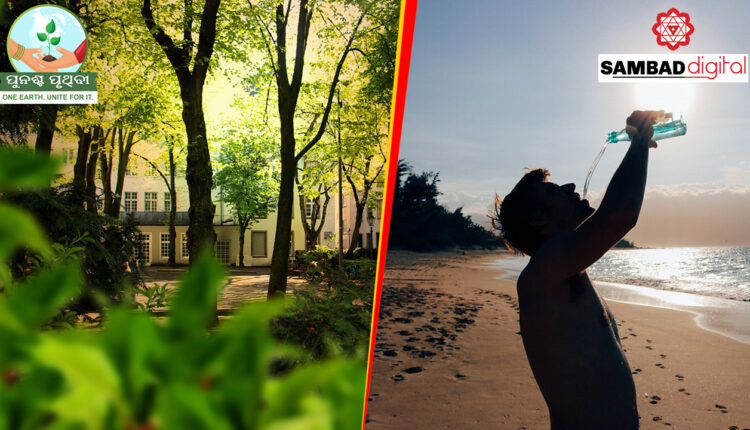 Bhubaneswar: As media reports suggest the number of hot days when temperature reached 50 degrees Celsius has doubled since 1980s across the world, researchers have been brainstorming how such situation could be averted in coming years.

In the same period, temperatures of 45 degrees Celsius and above occurred on average an extra two weeks a year.

If we zero in on Odisha, the State experienced hot days with temperature reaching 44 degrees Celsius in the last week of March this year. The State Capital, Bhubaneswar city was the hottest day across the country for four consecutive days prior to the onset of summer this year.

In this context, environmentalists and experts in the field advocate creating Urban Forests in the city areas of the State. These urban forests will act as buffer zone or lungs of the cities.

Even though urban forest concept is not new and big cities across the world are creating patches of green cover in the city limits, the same are yet to be emulated in Odisha intensively, said Piyush Rout, Urban Planner while raising concern about the rise in temperatures in the cities of the State.

Apart from minimizing pollution level, the urban forest will help in much extent to stop soil erosion and solve the problem of water logging that cities in the State especially Bhubaneswar has been facing during rainy season, he advocated.

However, the Urban Planner is disapproval of the decision of civic authorities to plant ornamental plants and hedges, and creating parks for jogging and walking.

“In the name of creating greenery, the city authorities are creating hedges and planting ornamental plants. The purpose of the setting up a buffer zone or Urban Forest will not be fulfilled with this approach. Emphasis should be on planting big trees which can provide expansive greenery and shade,” he opined.

Most importantly, the green cover must be created around canals or water bodies. Different species of birds will get attracted to the green patches and help in increasing plant density with different flora. This will be a complete ecosystem with this kind of planning.

People’s participation is a must for to make Urban Forest a success. They can come to a designated place in the city and plant trees. This way creating the Urban Forest will be a cohesive action of the government and the people. It would be a joint responsibility.

Village forests coming under city jurisdictions should be revived and can be developed into green patches.

Take Bhubaneswar for example. The city was initially set up by bringing villages under its jurisdiction in 1948. Had the planners and civic authorities cared for developed village forests into green covers in the city, there would not have transformation into concrete jungles as we see today, Rout explained.

The Centre announced a Nagar Van Policy on June 5, 2020 on World Environment Day and said 200 Urban Forest will come up across the country in next five years.

As per the World Health Organisation (WHO) norms, 12 square metres of green space per person is a must in residential areas.

Better planning and concrete measures at the ground for such green patches in cities are the need of the hour. Otherwise it will not be surprising, if the Indian cities become hottest place on the Earth for longer days.

Note: This story is a part of ‘Punascha Pruthibi – One Earth. Unite for It’, an awareness campaign by Sambad Digital.