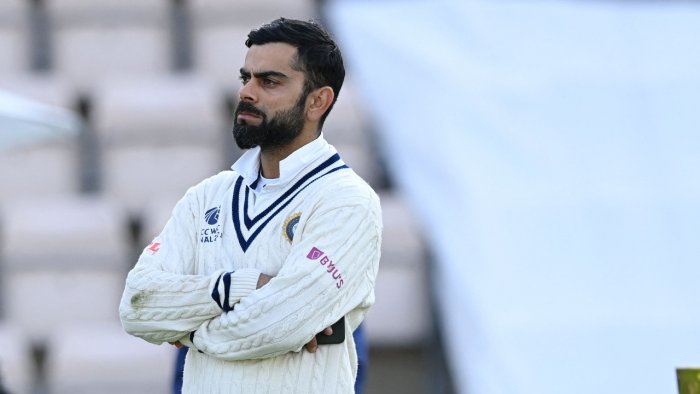 Southampton: Indian team skipper Virat Kohli on Wednesday blamed his batsmen for not being brave enough to put the New Zealand bowlers under pressure and for setting a target that was 30-40 runs short in the World Test Championship final defeat.

“We definitely need to work out better plans in terms of understanding how to score runs. We have to stay in sync with the momentum of the game and not let the game drift away too much,” said Kohli at a press conference after India lost the final by eight wickets here.

“I don’t think there is any technical difficulty as such. But I think it boils down to game awareness and being a little more brave in putting bowlers under pressure and not allowing them to bowl in similar areas for longer periods of time, unless it is absolutely overcast and the ball is swinging all over the place like it did on day one. The mindset has to be to score runs and find ways to score runs. You can’t be too worried about getting out,” he said.

Kohli, 32, said that they need to be able to move the game forward, up the scoring, to put the opposition under pressure.

“Outside of that we need to be able to move the game forward and put the opposition under pressure. That is key to playing and performing in difficult conditions,” he said.

No. 4 batsman Kohli, who fell to Kyle Jamieson in both innings, had earlier said at the post-match presentation that the team had fallen short of an ideal target that could have challenged the Kiwis. “We were 30-40 runs short of a good target,” he had said.

Kohli also said that he did not regret announcing the playing XI beforehand. The Indian team management had announced the XI on Thursday, a day before the game was to start on Friday. Even though the team management had the option of changing the playing XI on Saturday, the second day, when the toss took place after the first day was washed out, it stuck to the one it had announced originally.

“I don’t regret announcing my XI beforehand, because you need an all-rounder [Ravindra Jadeja] in the side but we made a unanimous decision that these are the best XI we can take into the park,” he said at the presentation ceremony.

Unlike India, New Zealand announced their team at the toss.