Wasn’t intimidating to work with Big B: Taapsee Pannu 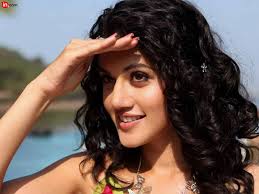 Actress Taapsee Pannu, who is gung-ho about sharing screen with Amitabh Bachchan in “Pink”, says she wasn’t intimidated at working with the megastar.

Was Taapsee intimidated at sharing screen space with the cine icon?

“No, it was not intimidating. In fact, it was exciting… I was not nervous at all, I was over-excited. That’s why I was so looking forward to it and I enjoyed sharing screen space with him… Doing those hard hitting scenes with him,” Taapsee told IANS over phone from Hyderabad.

The 29-year-old actress says working with the 73-year-old actor gave her a “different high”.

“It just gives a different high and your performance goes a notch higher because he is in the film,” added Taapsee, who visited the Skechers store on Friday.

Talking about “Pink”, the “Baby” star says it is not about rape or sexual assault.

“First of all, it’s not about rape at all. It doesn’t show any kind of rape. It is not based on one anyone particular character or story. It is actually inspired from lots and lots of real life incidents and lot of research has gone through… A lot of cases go to court regarding sexual molestation. It is not based on anyone particular case,” she added.

Directed by Aniruddha Roy Chowdhary, “Pink” is a thriller based film set in Delhi. It features Amitabh in the role of a lawyer.

Co-produced by Shoojit Sircar, “Pink” is all set to release on September 16. (IANS)

Attack on me will be attack on Indian Muslims: Zakir