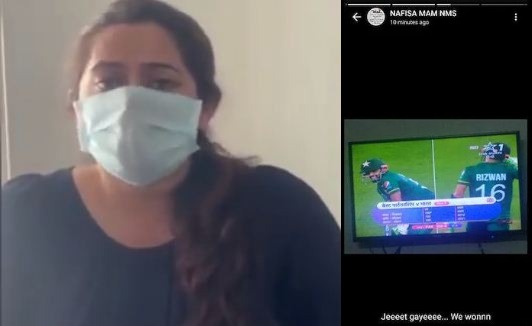 Jaipur/Bhubaneswar: Nafisa Attari, who was working as a teacher in Neerja Modi School in Rajasthan’s Udaipur and arrested after posting WhatsApp Status on Pakistan cricket team’s victory over Team India in the T20 World Cup match, has released a video, saying “I Love India”.

She had posted a photo related to the match as WhatsApp status with a caption “Jeeeet gayeeee… We wonnn”. When a parent of her student asked her whether she supported Pakistan, Nafisa replied ‘Yes’.

As screenshot of the teacher’s WhatsApp status went viral on social media, the school management expelled her from the job and issued a termination letter.

A case was registered against her under section 153B at Ambamata police station in Udaipur for acting against national unity. She was yesterday arrested and granted bail by a local court.

The court granted bail to Nafisa Attari on a surety bond of Rs 20,000 after she pleaded that there was no malicious intention behind the post. The next hearing in this case will be held on November 9.

Releasing a video, Nafisa apologised for her action. “I had jokingly replied to the person that I support Pakistan. I don’t support Pakistan. I am an Indian. I love India. If my actions have hurt sentiments of anyone, I apologise. I too realised that it was a mistake and deleted the WhatsApp status on that day,” she said in the video.