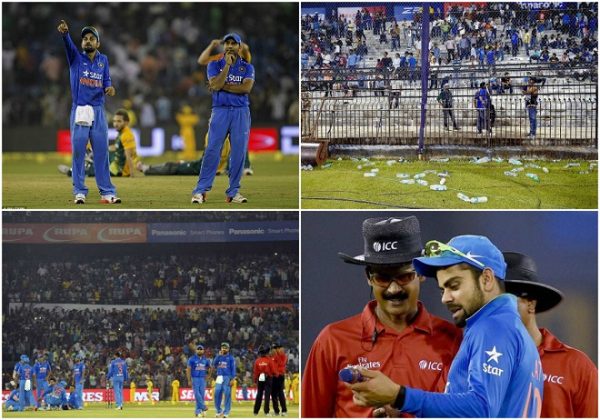 Are you a cricket fan? Do you have the heart to stand up and applaud the opponent for doing well on your home soil? Or will you throw rubbish on the ground, disgrace the sport you love and shame your state on an international platform?

A major part of relating to any given sporting event doesn’t necessarily concern ‘what you remember about it?’ but rather ‘how you remember it?’ Hence unfortunately in years to come people won’t remember that South Africa beat India by 6 wickets but rather talk about a bizarre incident of crowd indiscipline that took place in Barabati Stadium, Cuttack on 5th October 2015.

I am an Odia and we love to take pride in the smallest of affairs. So now we can take pride in humiliating the spirits of Cricket South Africa that is touring India, playing a series dedicated to Mahatma Gandhi and Nelson Mandela. We can be proud of the fact that after Eden Garden in 1996 World Cup, this becomes the most shameful crowd incident in India. Oh! And don’t you think this is the first time Barabati audience threw rubbish on the ground. It happened in a small and unnoticeable way when India played England and West Indies in the past. It is just this time we decided to make it a little grander and added a bit of chutzpah to it.

Moving away from the customary sarcasm, we live in a world of powerful electronic media that doesn’t let people forget easily. Images of plastic bottles scattered on the outfield, videos of match officials and players waiting helplessly to begin the match will haunt us for a long time. It is a fact that Barabati gets very few International games. So it is quite understandable that a dismal performance by Indian team would cause a great amount of frustration. But then nothing explains the shameful outrage. Ranchi has come up with their lovely stadium, Eden Garden continues to be the home of cricket in India, Dharamshala and its sceneries are unparalleled – there is no dearth of venues to host cricket matches. So, despite Barabati Stadium being a stunning one, this incident has somewhat washed away all chances of us getting a game in the T20 World Cup 2016.

People in Pakistan were desperate to see their national side play in front of them. Thanks to Zimbabwe who made that historic tour. And here we are, lucky enough to see our national side play from yards distance and still manage to do something utterly stupid that brings tag of being irresponsible for the state and country as well. Barabati doesn’t deserve another International game because there is a lack of basic sensibility.

Odisha hosts a number of games both in IPL and HIL but an International event is the perfect outing to show the world how good an ambassador of the sport we are but unfortunately we have let ourselves down.

We all go to watch cricket matches because we love the game and obviously would love to see our team win and when the contrary happens, disappointment is natural. But we must never forget, under any circumstance, that when we attend such international events in our State which is being telecast live around the world, we by default become ambassadors of our State. We must not forget that the entire world is watching us. If we are not sportive enough to accept defeat which is a part and parcel of the game, then we must not attend such events and bring disrepute to the state with our behaviour.

Having said this, in situations where the team performs as dismally as it did yesterday, when India was expected to level the series, we as spectators have to find better ways to show our disappointment than to throw bottles on the ground and disrupt play. What we did yesterday was, in plain words, shameful and uncultured. So much so that the focus of the entire nation and media is on the unruly crowd behaviour at Cuttack rather than the extremely poor performance of the team.

Public unrest is a problem and the first step to solve a problem is to acknowledge that there is one. A state which is obsessed with chasing self-proclaimed God men, a state which boasts of its rich cultural heritage has a bit of a soul-searching to do here.
And from media houses to cha khattis when we ask our cricketers “what are you playing for?” It high time we ask ourselves “Why do you follow this game for?” I hope the answer still is “for the love of it.”

The author is a radio cricket commentator and a print journalist who has covered a number of national and International cricket matches. He is now pursuing masters in Sports Journalism from University of Central Lancashire.

Odisha set to lose GI battle over rasagola against WB