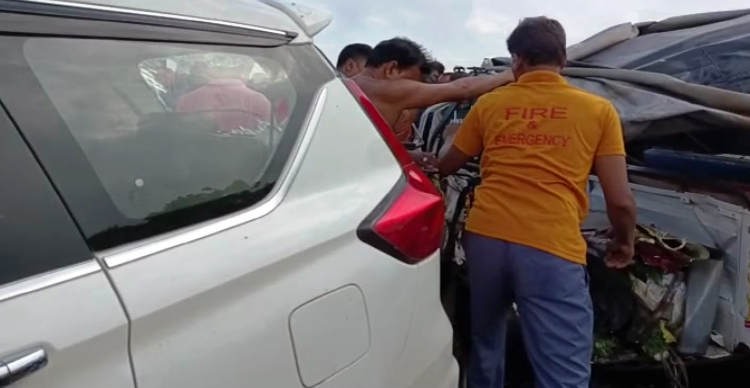 Worth mentioning, three persons, including a woman were killed and five others suffered grievous injuries after the Police Inspector’s  SUV collided with an autorickshaw and a two-wheeler on NH-57 near Badabahali Chhak early this morning.

Sonepur SP Amaresh Panda said the SUV is responsible for the mishap as it was being driven on wrong side of the road. Inspector Snigdharani Suna, who is the owner of the vehicle, was present in the vehicle when the accident took place. She was on her way to Balangir after Ratha Jatra duty in Puri. However, she absconded following mishap. Her driver will be arrested, the SP added.

Police sources said the mishap took place when the SUV coming from Sonepur hit an auto-rickshaw and a bike parked on the roadside on NH-57  at Badabahali Chhak. The three deceased were identified as Guabati Jai (40), Satya Pradhan (45) and Prananath Biswal (45). The injured were later rushed to a hospital in the nearby for treatment.

Vegetable vendors in the autorickshaw had stopped at Badabahali Chhak and were having a chit-chat with two people on a motorcycle, when the SUV rammed into the two other vehicles and fled the spot. The vegetable vendors were heading to Sonepur to sell their produces at a weekly Haat.

Meanwhile, Chief Minister Naveen Patnaik has announced ex-gratia of RS 2 lakh, each for the kin of the deceased and free medical treatment for the injured persons.