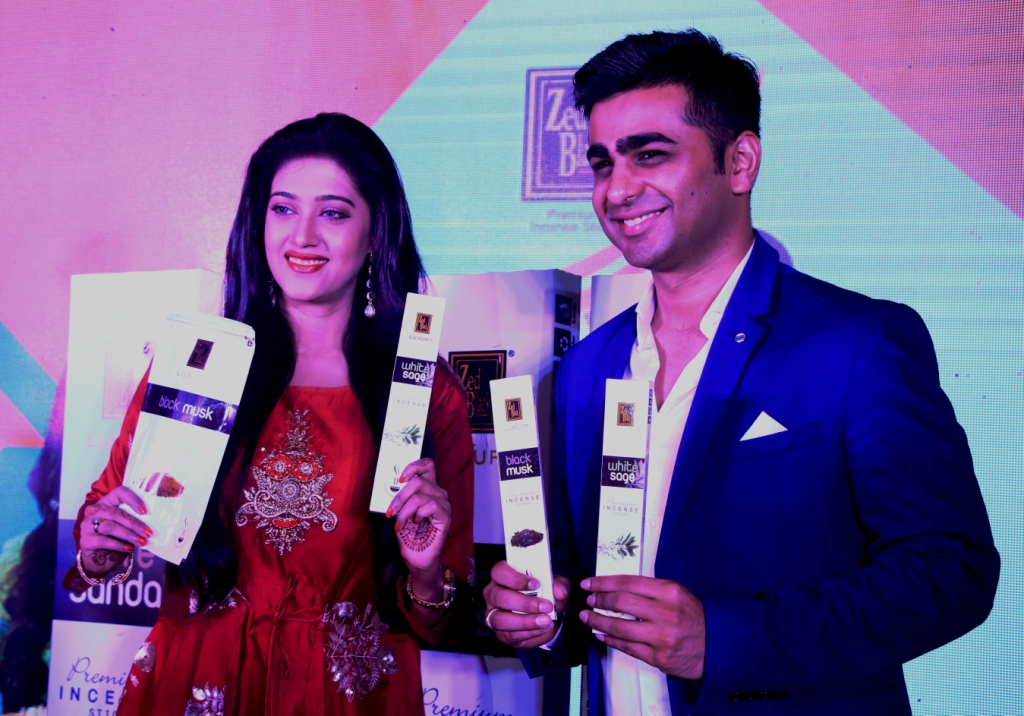 Ollywood actress Varsha Priyadarshini, who is the face of ZedblackArij, today launched its new series while flagging of its nation-wide campaign ‘Women Power in Agarbatti (Incense) Industry’, promoting the prominence of women manpower in the growing market of incense sticks globally.

With 70% women workers at its various units, the company has an annual capacity of 8 billion sticks a year spread across its own facility in Madhya Pradesh along with franchise manufacturing units spread across cities such as Kanpur, Raipur, Jaipur and Cuttack.

“The 10-city roadshow held in Mumbai, Raipur, Kochi, Chennai, Bhopal, Delhi, Dehradun, Bhubaneswar, Ranchi and Patna will pursue our commitment towards women empowerment and ‘Make in India’ by creating more jobs for women in the booming Agarbatti trade market of our country”, echoed Agarbatti maker Ankit Agrawal while in the city today.

Worth mentioning, MDPH, is the third largest Agarbatti manufacturer in the country, and is already enjoying a great run in Odisha with its popular brands Zed BlackArij & Manthan-100. The new, Zedblack Luxury fragrances offers four exotic variants like French Lavender, Pure Sandal, Black Musk, and White Sage, which has been specially created by sourcing natural and fresh ingredients from India and across the globe to create a relaxing, purify atmosphere and to restore mind and body.

MDPH has been providing direct employment to over 100 women in its franchisee manufacturing Unit in Jagatpur, Cuttack. Ankit Agarwal, Director Zed Black shared “The Rs 5000-crore Agarbatti industry is dependent predominantly on rural India. We are reaching out to these untapped resources by connecting with the rural families and providing them with both livelihood and rural empowerment through Agarbatti making business. The incense industry is a labour-intensive industry with each incense stick being handcrafted, predominantly by women workers. We are thus looking at increasing the number of women workers this year at our Cuttack factory and increasing our market share to 20% by end of this year”. Speaking about being amongst the major players in the organized agarbatti sector, he adds, “We are setting up one more state-of-the-art factory at Indore (MP) which is about 2.5 lac sq. ft. to be operational by September this year. This would increase our production capacity by 40% and provide employment to 1000 women in MP.”

Varsha Priyadarshini, Brand Ambassador of Arij said “I am extremely happy to be a part of the ZedblackArij family which glorifies Odisha and its culture. It’s also a great honour to support the cause facilitated by ZedblackArij which is fostering economic independence and employment to rural women from Odisha”

The Agarbatti market in India is pegged at Rs. 5,000 crore, and is evenly distributed between organized and unorganized sectors. ‘Zedblack’ is amongst the top three organized players in the country with 15 per cent market share and product extensions and entry into new segments like cosmetic and food division are likely to lead to a near 18 per cent growth for the company both in the domestic and global market. The company also announced overseas expansion plans with its first international office of Southeast Asia in Nepal and United States in the West.

Facebook will not remove fake news, but demote it