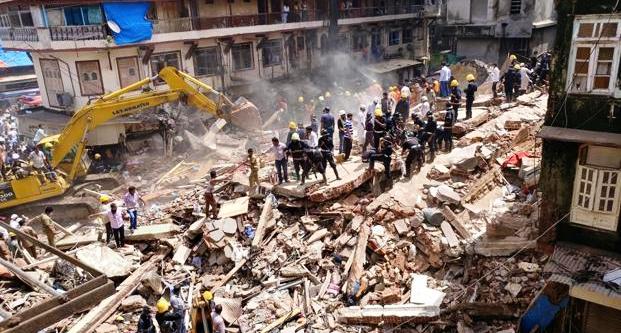 Mumbai: At least two people were killed and five others injured after a four-storey building collapsed here, officials said, adding that 12 other families were still trapped in the debris.

The Kesarbai Building in south Mumbai’s Dongri area collapsed at around 11.30 a.m.

However, Mumbai Building Repairs and Reconstruction Board (MBRRB) Chairman Vinod Ghosalkar said at least 12 people were dead. But this claim has not been officially verified.

He said that the dilapidated structure, believed to be over 80 years old, had been handed over for redevelopment to B.S.B. Developers, which has not yet started the work.

“This is a serious matter and we will investigate why the redevelopment work was not initiated, what caused the delays and take appropriate action against those responsible,” Ghosalkar told IANS.

Among those rescued include a woman, two men and a child, who are being treated at various hospitals.

Locals said at least 12-15 families buried under the rubble are awaiting help.

Opposition leaders including Congress’ Bhai Jagtap and Nationalist Congress Party’s Majeed Memon criticized the state government’s failure to identify dangerous buildings and take measures to vacate them since such tragedies occur during monsoons.

Kesarbai Building, which belongs to the Maharashtra Housing and Area Development Authority, also housed a catering business on the ground floor.

As a precautionary measure, the police evacuated an adjoining building.

The Fire Brigade, police and disaster management teams have rushed to the site and launched rescue operations, while the NDRF reached there and joined them.