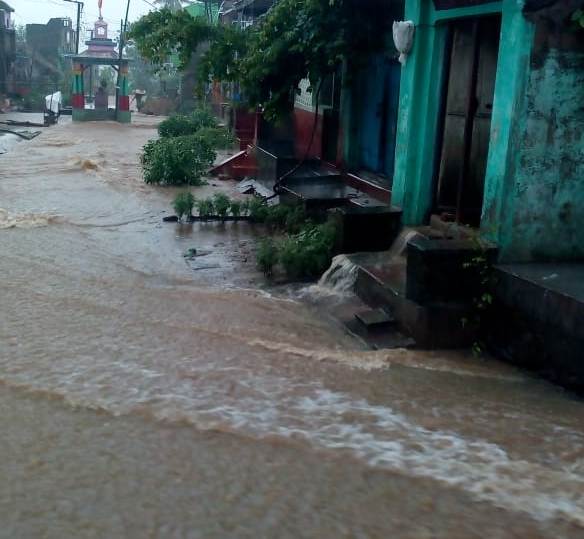 Bhubaneswar:As the very severe cyclonic storm Titli made landfall in Gopalpur and led to a downpour in eight districts, Odisha is facing a possible flood situation in its coastal belt on Thursday, an official said.

“We believe that the entire state, except some western parts, is likely to receive rain throughout the day. Depending upon the rainfall, we may see some flood in coastal Odisha. However, there is no flood-like situation as of now,” said Chief Secretary Aditya Prasad Padhi.

“There may be flooding of the Vansadhara river as Gajapati and Rayagada districts received heavy rainfall due to the cyclone,” he added.

The officer said that Gajapati district, which was most affected, received more than 200 mm of rainfall while Mohana block in the district received the maximum rainfall of 315 mm.

Titli made landfall between Odisha and Andhra Pradesh coast early Thursday morning, disrupting road and telecommunications networks and power supply in most parts of Ganjam and Gajapati districts.

The maximum brunt was borne by Gajapati district, with uprooted trees hampering movement of vehicles. However, the damage in Ganjam district is lesser than what was anticipated, said Padhi.

He said that two more NDRF teams have been deployed in Gajapati district for restoration work.

Wind speeds of 80-100 kmph continued to pummel Gajapati district. Road-clearance work and other restoration steps will be taken up once the situation improves, said the Chief Secretary.

He said that District Collectors were authorised to take decisions on evacuated people — as to whether they stay in cyclone shelters or go home.

Around three lakh people have been evacuated so far in the coastal state and 1,112 relief camps set up for the evacuees. As many as 105 pregnant women in Ganjam and 18 in Jagatsinghpur were shifted to hospitals.

The cyclonic storm triggered extremely heavy rainfall in Ganjam, Gajapati and Puri districts. Wind speed at Gopalpur during the landfall was around 126 kmph.