After IFFI, Anupam Patnaik’s ‘Pratikshya’ to be screened in Washington DC 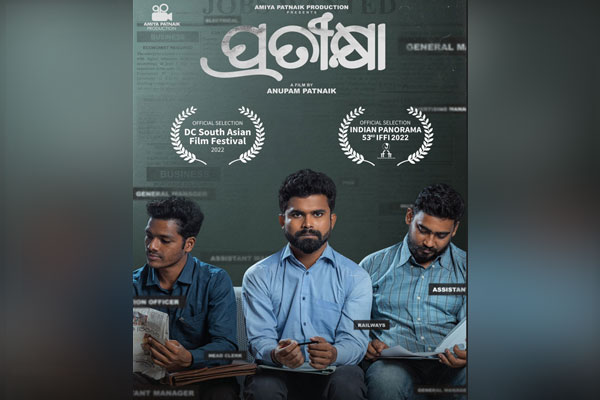 Bhubaneswar: After making it to this year’s International Film Festival of India (IFFI) as the only Odia film, filmmaker Anupam Patnaik’s directorial ‘Pratikshya’ has now been selected to be screened at the 11th Annual DC South Asian Film Festival scheduled from November 8 in Washington DC.

Sharing his enthusiasm for the movie’s screening on the foreign land,  Anupam said, “ It’s a matter of great pride that an Odia film has been selected among other South Asian films. I would request all our Odia brothers and sisters to come together and watch the film!”

On October 22, ‘Pratikshya’ made headlines on being listed among 25 feature films that have been scheduled for screening at IFFI in Goa.

Odia movie ‘Pratikshya’ is inspired from short story written by award-winning author Gourahari Das.  It narrates the story of an ordinary middle-class youth’s struggle between dreams, desperations and aspirations and how a course of events changes his life.

“It is an extremely proud moment for me and my team. ‘Pratikshya’ is a movie we made with a lot of passion and with a team of dreamy debutants, the passion of filmmaking and telling our stories to the world got ignited like no other. This week has been one of the best ones so far. First our trailer launch, which received much love, then the news of being selected in IFFI and now DCSAFF. I believe with Pratikshya, Odia movies have arrived truly and well at the global stage,” said Anupam Patnaik.

“We hope Pratikshya ends the wait for Odia audiences around the world and serves as the light at the end of the tunnel showing the true potential of Odia stories,” he added.