Present during the tour were Collector Swadha Dev Singh and other district officials. Along with elaborate arrangements, the administration had beefed up security for the Governor's visit. 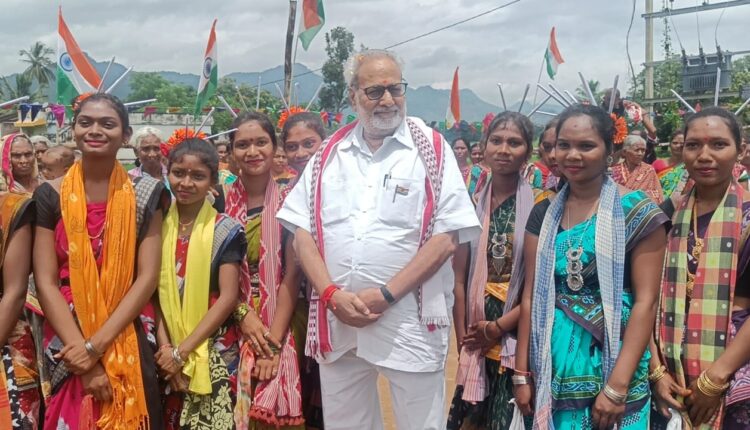 Rayagada: After a two-day tour to Koraput district, Odisha Governor Professor Ganeshi Lal today visited Rayagada district to review and assess progress of various government welfare programmes. At Kolnara block, he interacted with  women members of self help groups who have taken up marigold cultivation, apiculture and vegetable farming. Moving on to Deopur, he inspected the Amrit Sarovar Mission in the village. In Sarubuguda of Mukundpur gram panchayat, the Governor oversaw pisciculture in the village ponds, animal husbandry and poultry farming activities by SHGs and held discussions on various issues with them. He visited the Rayagada Ekalavya Adarsh Vidyalaya and engaged in intellectual interactions with the students on many topics and later went to Govind Chandra Dev High School.

Present during the tour were Collector Swadha Dev Singh and other district officials. Along with elaborate arrangements, the administration had beefed up security for the Governor’s visit. Along with SP Vivekananda Sharma, an ASP, five DSP, nine inspectors, 15 sub inspectors, 17 ASIs, 76 constables, seven platoon force and five DBS teams were deployed.

Earlier in Koraput, the Governor had visited the Central University of Orissa, Sunabeda campus. He was seen enjoying a meal of sweet corn in Laxmipur block.