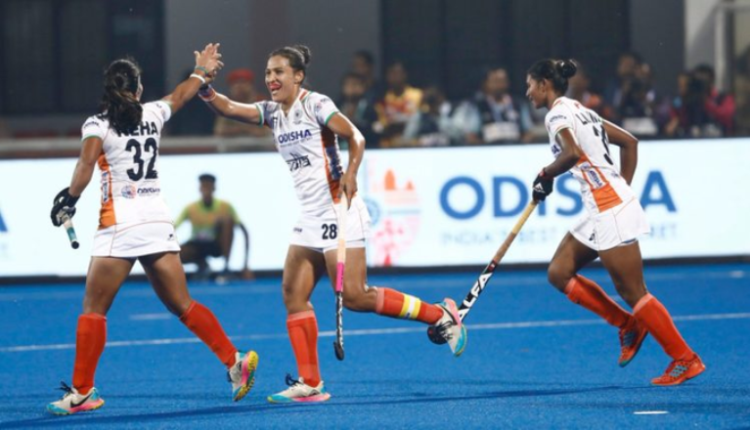 Bhubaneswar: The Indian women’s hockey team on Saturday confirmed a place in the 2020 Olympics after surviving an extraordinary fightback from the USA in the second leg of their Olympic qualifier at the Kalinga stadium in Bhubaneswar. The USA fought back from a 5-1 deficit from the first leg to level the score 5-5 in the first half. India put up an improved performance in the second half with skipper Rani Rampal scoring what turned out to be the winning goal in the 49th minute.

After what was a nightmarish first half in which a relentless USA banged in four goals, India came out in the second half as a much more compact unit. They were losing possession cheaply in the early exchanges but being more intent in attacks meant that they were pushing back the confident Americans.

All of this culminated in a penalty corner. Gurjit Kaur took the drag flick which missed the target by inches. She kept it on target when they won another PC a couple of minutes later and it was a brilliant reflex save from Kelsey Bing that kept the scoreline level. The third quarter ended with the score 5-5 on aggregate and it was the first in which India hadn’t conceded a goal.

The final quarter started with India much more comfortable in possession. They were given an impetus when the USA got a yellow card and were thus down to 10 players for five minutes.

India took advantage with Rani firing it into the roof of the net from the edge of the circle after a scramble in the box in the very next minute.

India kept the USA under strain for much of the final quarter before the final few minutes, when they were pushed back by the visitors. However the hosts held on and ensured a place in the Olympics for the second time on the trot.

India’s four-goal advantage was wiped away in the first half of the match as a relentless USA came out all guns blazing. They got consecutive penalty corners in the third minute, with a shot from rebound on an open goal going wide.

The USA kept at it however and soon got the first goal through another PC. Amanda Magadan managed to get a deflection in the air off captain Kathleen Sharkey’s drag flick and scored the first goal of the night in the fifth minute.

India put the US defence under some pressure for a few minutes after that but the balance soon shifted back to the away side’s favour. Sharkey cut the deficit to two goals in the 14th minute after a brilliant passing move from the USA. The hooter blew a minute later with the USA leading the match 2-0 and trailing 5-3 on aggregate.

Loose balls and carelessness in possession cost India dear in the first quarter and it was more of the same in the second. Five minutes in, Alyssa Parker finished a shot from Danielle Grega to make it 3-0 on the night and 5-4 on aggregate.

India forced a penalty corner after that. It was a scrambled affair which the USA cleared with ease. They were hardly able to hold on to possession as the USA dominated the midfield. The next few minutes of the match were a messy affair with both teams getting green cards and India also collecting a yellow.

Just two minutes before the half time hooter went off, Magadan scored her second of the night to complete the USA’s extraordinary comeback.