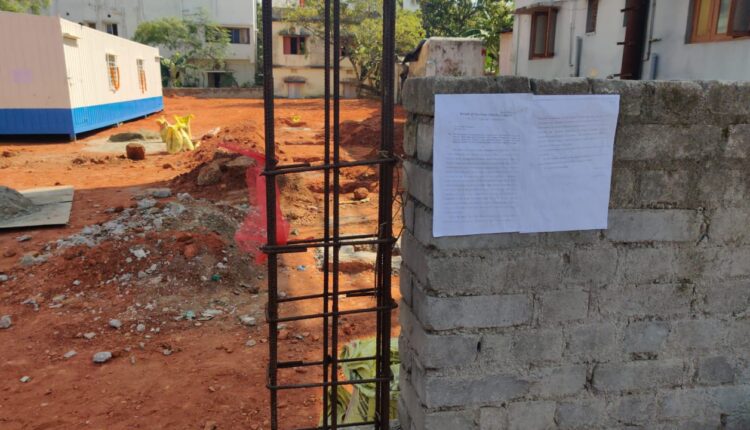 Bhubaneswar: The Khurda district administration today intervened into the ongoing controversy around Lord Lingaraj’s land in Bhubaneswar which was sold to mining contractor B Prabhakaran’s wife Kiruthika Prabhakaran.

After media highlighted how the Debottar land, located only 200 metres away from the Biju Patnaik International Airport, was sold to Kiruthika Prabhakaran, wife of the mining contractor and construction activity was being carried out, the Bhubaneswar Tahsildar today intervened into the matter and put up an order notice mentioning halt of work order for indefinite period.

It is worth to mention Kiruthika Prabhakaran bought the 228-decimal land patch from one Hrushikesh Das for Rs 6.45 crore. The deed of sale was made on November 5, 2021 at Bhubaneswar.

Questions are being raised as to how the Debottar land was sold to Kiruthika Prabhakaran. In September 2020, the then Revenue Secretary Bishnupada Sethi had directed the Khurda Collector to bring back the land owned by Lord Lingaraj to the temple’s land records.

Sethi had also directed the Khurda Collector to refer the matter on change in ownership of the Debottar land to the Crime Branch for an investigation.

This apart a revision case on bringing back the Deottar land has been under trial before the Board of Revenue Court.

Reacting on this, Minister and Bhubaneswar Ekamra MLA, Ashok Chandra Panda said there is no way the land owned by Lord Lingaraj will be handed over to anyone. The patch of land in question was earlier being occupied by a family of servitor who was in charge of the temple treasury and performing puja, the Minister added.

If anything illegal is done, neither the Chief Minister nor I will support it, said Panda.

Mining contractor B Prabhakaran is also the Managing Director of Thriveni Earthmovers.