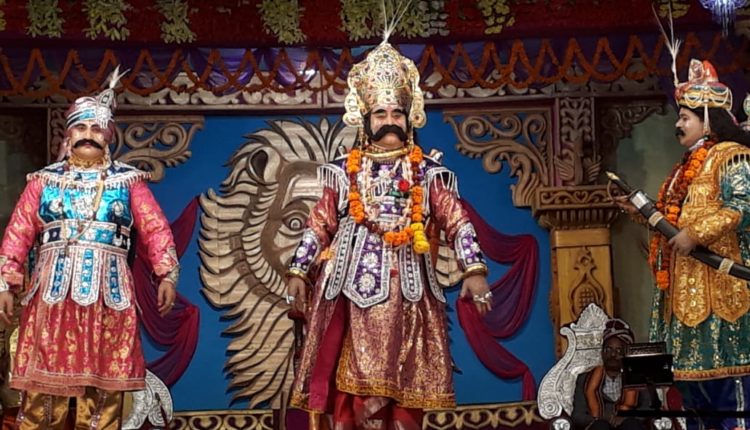 Bargarh: The famous 11-day long ‘Dhanu Jatra’, considered as the largest open air theatre of the world, ended here today with the killing of King Kansa in the hands of his nephew Lord Krishna.

Despite his killing, however, it was Kansa who won the hearts of the audience throughout the 11 days of the festival. The audience will now have to wait for another year to see his power packed performance.

The fest depicting the mythological episode involving the killing of Kansa reaffirms the victory of good over evil. The final act was staged with Lord Krishna and Balaram entering the court of Kansa known as Ranga Sabha. The plot hatched by Kansa to eliminate Krishna goes awry as Krishna overpowers and kills him.

The mighty king collapses on the glittering pandal after being informed that Krishna is approaching his durbar to participate in Dhanu Jatra. Kansa reminisces the akashvani (celestial announcement from the sky) about his killing in the hands of his nephew. Sensing his death nearing, he goes berserk and puts up a brave front. But in the end, it turns out to be false bravado.

After a brief resistance at Kansa’s backyard, the evil king loses his fight, bleeds profusely and finally tumbles down the stairs of the pandal.

As per tradition, Kansa would then leave for Puri to visit the Jagannath temple to seek forgiveness from the Lord for all his unsanctified utterances against Lord Krishna.