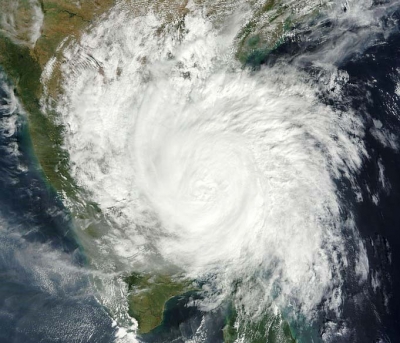 New Delhi: The India Meteorological Department (IMD) on Sunday invoked the yellow code warning for Andaman and Nicobar Islands as rainfall lashed parts of the islands while the depression over north Andaman Sea is set to turn first into a deep depression and then into cyclonic storm Asani on Monday.

Light to moderate rainfall/thundershowers at most places with heavy to very heavy rainfall at a few places and isolated extremely heavy rainfall was witnessed over Andaman and Nicobar Islands with higher wind speeds causing damage to infrastructure such as snapping of electric lines and at some places, falling electric poles and also uprooting of some trees.

The administration has announced a holiday on Monday for all government, government-aided, and private schools as a precautionary measure. Thousands of people have been evacuated from the areas near the shores that are likely to be inundated.

National Disaster Rescue Force (NDRF) teams were out in the sea warning and shepherding fishermen back into safe areas and were busy issuing warnings for all not to venture out into the seas on Monday too.

“The depression over southeast Bay of Bengal and adjoining south Andaman Sea, moved north-north-eastwards at a speed of 12 kmph and lay centred at 5.30 p.m. over north Andaman Sea and adjoining southeast Bay of Bengal, about 200 km north-northeast of Car Nicobar (Nicobar Islands), 100 km south-southeast of Port Blair (Andaman Islands) and 730 km south-southwest of Yangon (Myanmar),” the IMD’s evening bulletin said on Sunday.

“It is likely to move nearly northwards along and off Andaman and Nicobar Islands, intensify into a deep depression during next 12 hours (by early Monday) and then into a cyclonic storm during subsequent 12 hours (by Monday evening),” the bulletin said.

Apart from the high rainfall, the IMD has also warned of higher wind speeds and expressed possibilities of damage to vulnerable structures, localised landslides/ mudslides and damage to horticulture and standing crops in some areas due to squally wind and inundation.

International Forest Day: Why are Forests crucial for our survival?

Cyclone Asani: Fishermen in Odisha warned of action for…