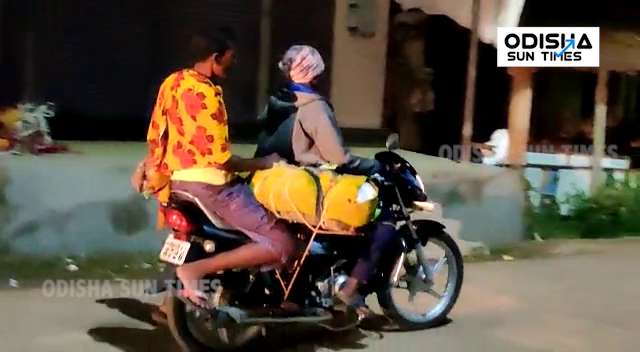 Nabarangpur: While the story of Dana Majhi of Kalahandi is till still fresh in the minds people of the state, another man in Odisha was forced to carry the body of his father on a motorcycle as he failed to avail a hearse for the same.

The incident has been reported from Nabarangpur district, where one Loki Santa of Kudumadhaa village under Raighar block carried the body of his father on a two-wheeler bike and drove around 20 km after being denied a hearse.

Reports said Loki’s father Bali Santa was ill and had gone to a relative’s house at Bansibandha village under Jharigaon block yesterday for a traditional treatment. When his condition worsened, an ambulance was called in to take him to a hospital. However, as the ambulance failed to reach on time, Bali died.

On getting information, Bali’s son Loki reached Bansibandha last evening to bring the body back to his village for last rites. However, after failing to get a hearse, Loki carried his father’s body on a motorcycle with the help of others and drove towards his village.

Midway, a few mediamen spotted them and advised Loki to take the body to a hospital for post-mortem. Later, Loki took the body to Umerkote Community Health Centre (CHC). As per latest reports, Bali’s body was handed over to his family members after post-mortem.

Thunderstorm alert for these Odisha districts this evening