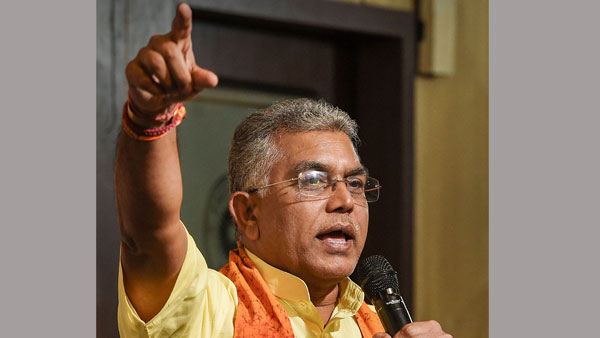 Kolkata: A day after saying communists “deserve” to be beaten up, West Bengal BJP unit Chief Dilip Ghosh on Tuesday waded into controversy yet again by calling the attack on JNU students a “staged” incident and claiming it was yet not proved whether JNSU president Aishe Ghosh had real blood or only colour on her head.

“It has now come to light that the JNU incident is staged,” Ghosh told mediapersons, alleging it was a ‘conspiracy’ to get wind into the sail of the movement (against new citizenship law).

“How could outsiders enter the university with faces covered, and zero in on ABVP members to beat them up. Then they seemingly disappeared.

“They must have removed their face cover and mingled among students. Or the students who brought them must have hidden them,” he said.

On Ghosh’s head injury, he said: “One person was allegedly hit on the head. It is still to be tested whether it is blood or some colour on her head..

“Over that incident attempts are being made to create turmoil in the country. This shows the communists and other opposition parties are suffering from existential crisis,” he said.

On Monday, Ghosh had said Communists had started getting thrashed in India and they “deserve” it.

“It is right that communists have started getting beaten up in the country. Perhaps they deserve it. The way they have behaved through the decades, this is not unnatural,” he said.

Ghosh said educational institutes are not venues for violence.

“But who imported violence there? The communists, the SFI (CPI-M student wing Students Federation of India). Excepting Tripura, Bengal and Kerala, we don’t hear about violence in educational institutes elsewhere. Now it is getting evens stevens,” Ghosh added.

On Sunday, violence swept JNU as several masked individuals, both male and female, thrashed students, including girls, and teachers inside the varsity campus with wooden and metal rods.

Two officer-bearers of the Jawaharal Nehru University Students Union (JNUSU), including President and SFI leader Ghosh. They blamed the RSS’ student wing ABVP for the violence in the campus.

Hostel rooms and lobbies were vandalised during the assault while several vehicles parked on the roads were damaged by the unidentified miscreants.