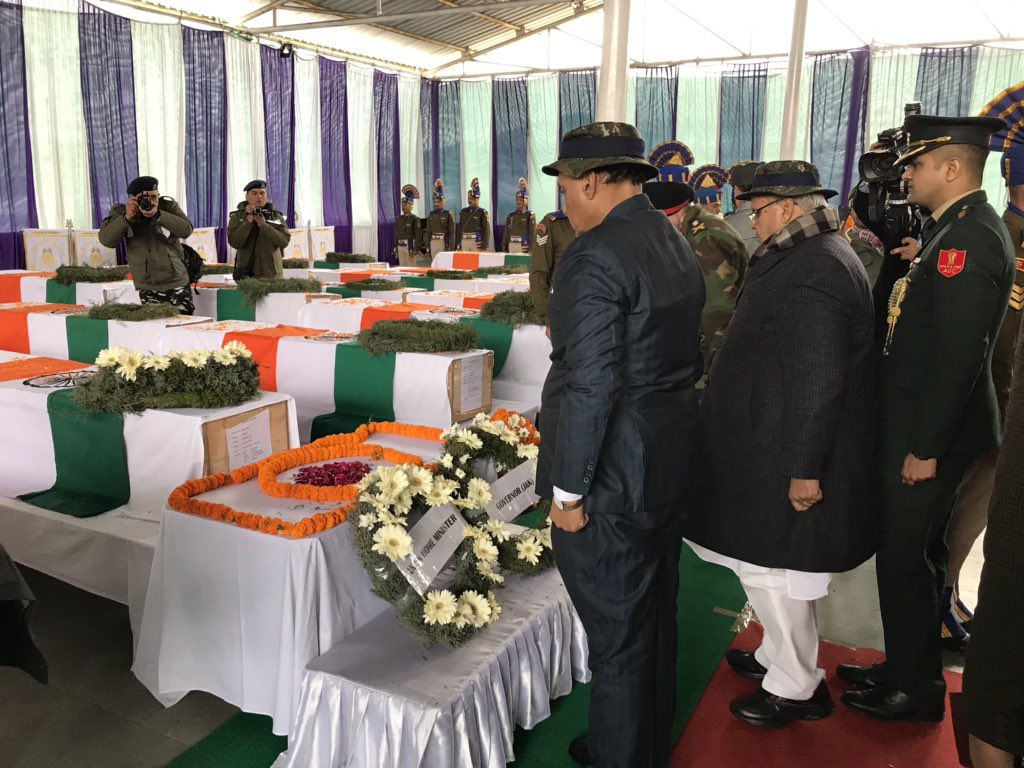 Rajinikanth expressed his anger over the attack, in which 49 troopers were killed, saying enough is enough.

“I strongly condemn the unpardonable violence of the terrorists at Pulwama in Kashmir enough is enough! Time has come to put an end to all these barbaric acts.

“My heart goes out to the families of the jawans who lost their lives and are injured. To those brave hearts departed… May their souls rest in peace,” he said in a statement.

Big B said he is “distressed and disturbed” after the attack.

A suicide bomber on Thursday rammed his SUV packed with explosives into a CRPF bus on the Srinagar-Jammu highway in Pulwama district.

Following the terror attack, film fraternity members described it as “barbaric”, “tragic” and a “heinous crime against humanity”. They said they were heartbroken at the news of the attack.

Here’s what others have tweeted:

Lata Mangeshkar: I condemn the terrorist attack in Jammu-Kashmir’s Pulwama district. I would like to pay a tribute to the martyrs. I am with the families of these soldiers in this moment of grief.

Shah Rukh Khan: Heartfelt condolences to the families of our valiant jawans. May the souls of our countrymen who laid their lives down for us rest in peace.

Salman Khan: My heart goes out for the jawans of our beloved country and their families who lost their lives as martyrs to save our families… You stand for India.

Aamir Khan: I am heartbroken to read about the terrorist attack on our CRPF jawans in Pulwama. It’s so tragic. My heartfelt condolences to the families of the jawans who have lost their lives.

Ranveer Singh: Disgusted at the cowardly terror attack on the CRPF soldiers in Pulwama — my sincere condolences to the families of our brave jawans. Saddened. Angry.

Hrithik Roshan: Deeply grieved on hearing about the Pulwama attack. My heartfelt condolences to the families of the jawans martyred.

Rajkummar Rao: Pulwama terror attack is a heinous crime against humanity. My condolences go out to the families of our soldiers who have lost their lives. May our martyrs rest in peace and the perpetrators of the crime brought to justice.

Neil Nitin Mukesh: My respects and condolences with the families Pulwama terror attack.

Saqib Saleem: Shocked and deeply saddened at the attack on our soldiers in Pulwama. Heart goes out to the families of the deceased soldiers. When will this hatred stop?

Disha Patani: Shocked! I salute and stand in solidarity with our Armed Forces. This deplorable act of cowardice and terror should be dealt with unforgiving urgency. No family should lose their sons like that, no soldier should be martyred like this. Deepest condolences to the families.

Juhi Chawla: Deeply saddened to hear the barbaric attack on our brave soldiers. My thoughts and prayers are with the families of the bravehearts.

Pooja Bhatt: The day hate won. Are we going to let hate have the final say or through this dark and excruciatingly painful phase, find the capacity and courage to give love one last chance?

Nora Fatehi: Deeply saddened to know about the cowardly attack on CRPF Jawans convoy in Pulwama. My prayers and condolences for bravehearts’ family who lost their lives.