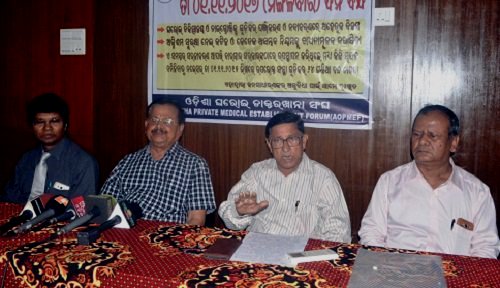 Protesting against the delay in getting requisite approvals from the state government, a private hospitals’ body today reiterated its plan to go on a strike on November 1.

All Odisha Private Medical Establishment Forum (AOPMEF), a body of private hospitals, today held a press conference here where it announced that it would wear black badges on November 1 to register their protest.

“Despite stir, the inpatient and emergency department services would continue at the hospitals. However, the services at the outpatient department would not be available,” said vice president of the forum, Dr Jagannath Mohapatra said.

The members of the forum alleged that despite repeated reminders the authorities have failed to provide renewal license and registrations.

Besides, they demanded amendment to the Fire Services Act.

It may be mentioned here that the forum had extended its support to the Trustee of the Institute of Medical Sciences and SUM Hospital who was arrested following the fire tragedy that killed 29 persons. Expressing solidarity, it had announced to go on an agitation on November 1.

Odisha’s Sukanya Parida picked up for ODI series against Indies