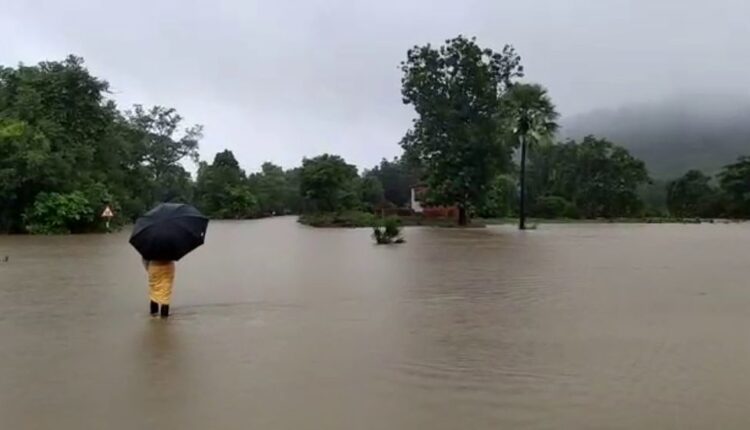 Heavy to very heavy rainfall coupled with strong surface wind is likely to persist in many parts of the state till August 17 under the influence of the low pressure area, which has become well marked, the Meteorological Centre here said.

With heavy downpour pounding most parts of the state since Thursday, life was thrown out of gear in several areas of Malkangiri, Bhadrak, Dhenkanal, Jajpur, Cuttack and Kendrapara districts, officials said, adding several villages were cut off from the rest of the state as rainwater was flowing over roads and low level bridges in some places.

Besides submerging roads, incessant rainfall also inundated paddy fields and caused damage to mud and thatched dwelling units in some places of Malkangiri and Bhadrak districts, they said.

In Malkangiri, vast areas were submerged with water as a small dam in Mathili block was damaged due to torrential rains, while fragile houses were also damaged in the area where road links were snapped following submergence of roads.

Similar reports were received from Dhamnagar area of Bhadrak district, Kamakhyanagar area of Dhenkanal and Banki in Cuttack district where rainwater also gushed into houses in low-lying localities, they said, adding that flood like situation was created in some areas of Bhadrak and Dhenkanal districts.

The highest rainfall of 340 mm was recorded in Chandikhol of Jajpur district followed by 32 mm at Binjharpur in the same district, it said, adding rainfall of varying intensity is likely to lash many parts of the state till August 17.

Issuing an ”Orange Warning” for Sambalpur, Jharsuguda, Bargarh, Deogarh, Angul, Bolangir, Nuapada, Sundargarh, Keonjhar, Dhenkanal, Jajpur and Malkangiri till Sunday, the MeT Centre forecast heavy to very heavy and extremely heavy rainfall in some places in these districts during the period.

Heavy rainfall may also occur at some areas in Balasore, Mayurbhanj, Bhadrak, Cuttack, Kalahandi, Kandhamal and Koraput districts where Yellow Warning was issued till Sunday.

Similarly, heavy rainfall is likely to occur at isolated places over the districts of Koraput, Nuapada, Bargarh, Bolangir, Jharsuguda, Sundargarh and Sambalpur on Sunday and Monday, it said issuing Yellow Warning for these districts.

While orange warning stands for weather conditions that have the capacity to impact the life of people significantly and requires the authorities to remain prepared, yellow warning implies the possibility of disruption of normal life including movement due to adverse weather conditions.

The MeT office advised the fishermen not to venture into sea along and off Odisha coast till Monday as squally weather with surface wind with 45-55 kmph speed may prevail during the period.

COVID-19: Prohibitory order under Sec 144 imposed in this Odisha village