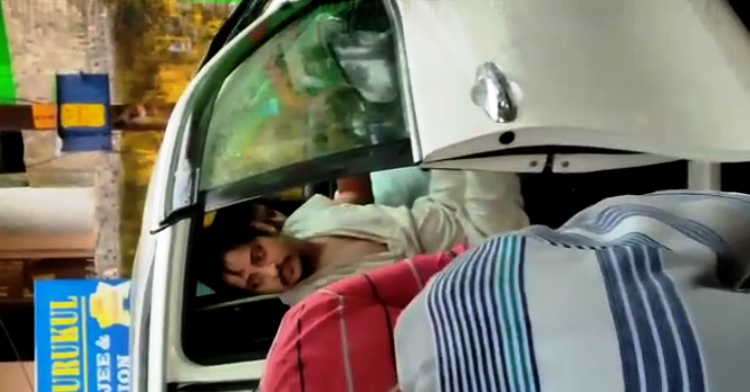 Bhubaneswar: The lead actors of recently-released Odia movie ‘Premam’– Babushaan Mohanty and Prakruti Mishra– were caught in an on-camera brawl with the actor’s wife this morning.

The incident came to fore after few videos of the same recorded by some passersby went viral on social media.

In the videos, Babushaan can be seen on the driver seat of an SUV with Prakruti Mishra sitting next to him and his wife Trupti fighting with him alleging infidelity. The two actors can be seen being dragged by Babushaan’s wife Trupti Satapathy in front of a tutorial in Satya Nagar area.

Trupti was also seen manhandling the actress both inside and outside the vehicle. The actor’s wife was found holding the female actor’s neck from behind, pulling out her hair and pushing her on road with the latter shouting for help.

The actors appeared to have landed in an embarrassing situation with locals engaged in filming the high-voltage drama on the street.

Trupti can be heard shouting… “Tu mo paribar ku nasta Kari delu...” (You destroyed my family). After escaping from the clutches of Trupti, the actress is seen walking away from the spot. After repeated attempts, the celebrity duo could not be contacted.

With no word from these actors, it would be premature to conclude anything on the reason behind this controversy. However, rumours has it that the duo is in a relationship which is ‘more than friends’.

[WATCH] Trailer of ‘I Am Groot’ animated series released; to premiere on August 10

Challenging yet rewarding: ‘777 Charlie’ director on shooting with a dog