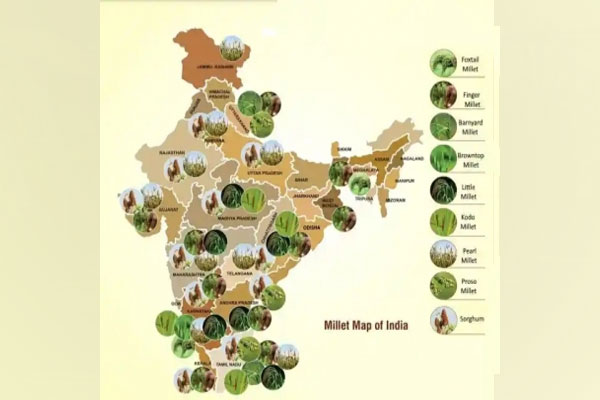 New Delhi: Amid concerns over global food shortage, India — the world’s largest producer of millets — is looking at expanding its public distribution. The short nutritious grains may be distributed for mid-day meals and also at the Anganwadi centres.

While it is imperative to reset focus on production of these short grains with their growing acceptance within the country and outside and rising threats of food insecurity, experts said it must be done in a well-planned manner ensuring that it does not lead to “lower cultivation of other staple crops such as rice and wheat”.

Millet crops are essentially resilient to drought and floods and can be produced even at drylands.

“Increased production of millets should enlarge the overall food plate, not lower it by reducing other crops yields,” a food analyst with one of the industry bodies told India Narrative.

Compared to other cereals such as wheat, rice and maize, production of millets is still low in the country. “The increase in millet output and distribution can easily ease food pressure in India but authorities must prepare a roadmap for the same at the earliest,” he said.

In India, millets are grown in about 21 states but Rajasthan, Karnataka, Maharashtra, Uttar Pradesh and Haryana top the list. In a total cultivated area of 13 million hectares, more than 16 million tonnes of millets of various varieties are produced.

Dwijendra Nath Guru, an advocate and activist for sustainable food systems and founder of the Bengaluru-based resource and support organization The Millet Foundation told Deutsche Welle that “simply replacing the consumption of one type of grain with another in a way that would create a new monoculture of crop dependence”.

“And we cannot have a myopic Eurocentric policy that simply deprives developing countries of their share of grains which will be exported,” the news organisation quoted him as saying.

Finance Minister Nirmala Sitharaman, in this year’s budget had also announced assistance for post-harvest value addition and branding of millet products in the domestic as well as global markets.

An Assocham report published last year said that post green revolution, the scenario of Indian agriculture has been changed and people shifted to cultivate rice and wheat due to several reasons such as changing in food habit, increased income, higher productivity, urbanization, competition with other crops.

“That trend is changing and needs to be changed but with care and caution,” the analyst said as he referred to increased global food concerns in the post Covid-19 phase driven by the Russia-Ukraine war.

One of the main drivers of the Sri Lankan economic crisis is the policy shift in its agriculture sector. “While in Sri Lanka, the crisis has been led by a switch to organic farming, India too needs to learn a lesson — a lesson of caution when it comes to the agriculture sector. The idea (in the case of millets) should be to increase production but definitely not in lieu of other important crops — that must be kept in mind,” the food analyst noted.

Meanwhile, the UN General Assembly, which adopted a consensus resolution sponsored by India, has declared the year 2023 as the International Year of Millets.

Too soon to tell whether monkeypox could become next pandemic: WHO