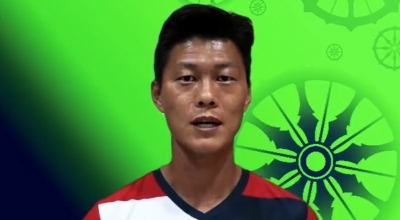 Bhubaneswar: South Korean men’s hockey captain Lee Namyong said that the team has a lot of experience and is confident of a good showing in the FIH Odisha Hockey World Cup 2023 Bhubaneswar-Rourkela.

Team Korea touchdown in Odisha on Sunday and received a rousing reception at the Biju Patnaik International Airport here.

“Our players are excited to be here and we have big ambitions in the tournament. We want to do well and have confidence that we will be able to win the big matches in FIH Odisha Hockey Men’s World Cup 2023 Bhubaneswar-Rourkela. Our team has a lot of experience and it will be crucial for us,” Namyong said.

“We want to take one game at a time in the tournament. Our first match is against the defending champions Belgium and it will be really difficult. However, we have to play to our full potential and if we do the basics right, then, we can produce a good result,” he added.

“We have played a lot in India and now we are excited to be here again for the FIH Odisha Hockey Men’s World Cup 2023 Bhubaneswar-Rourkela. We love coming here and playing in India as it’s a great feeling to play in front of such a big crowd. The tournament is filled with top teams and we are ready to face them and produce exciting results in front of the fans,” head coach Shin Seok Kyo said.

The head coach also shed light on their preparations for the group matches which include the defending champions Belgium as well.

He stated, “Our team is really good and the players have belief in their abilities. We have top teams like Belgium and Germany in our group and the matches will be difficult against them in the group stage. However, we will give our 100 per cent in the match to win it.”

Placed in Pool B with Belgium, Japan and Germany, Korea will play Belgium on January 14 and Japan on January 17 at the iconic Kalinga Stadium in Bhubaneswar, before taking on Germany in Rourkela on January 20.