The predicted system is likely to become more marked and move west-northwestwards during the subsequent 48 hours, the agency said.

“A Low Pressure Area is likely to form over south Andaman Sea around 29th November, 2021. It is likely to become more marked and move west-northwestwards during subsequent 48 hours,” the IMD said in its bulletin.

The IMD:GFS model indicated that the system is likely to move towards Odisha coast and make landfall around December 3 (See pic below). 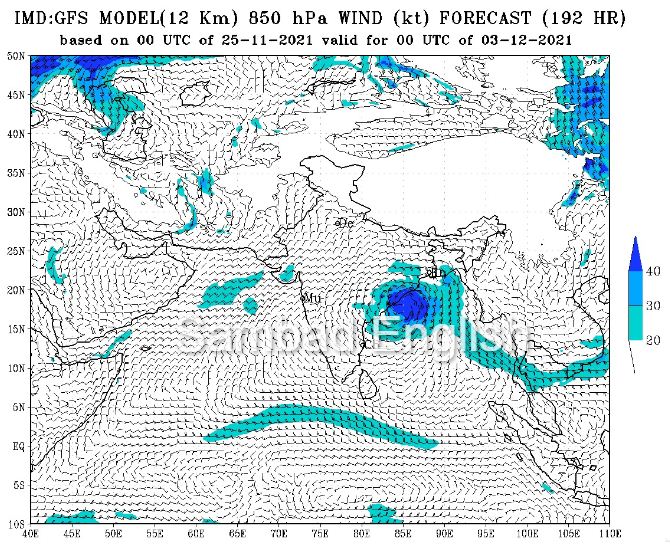 Earlier, the IMD in its ‘North Indian Ocean Extended Range Outlook for Cyclogenesis’ issued last week had forecasted regarding formation of a fresh low pressure area over the equatorial Indian ocean and adjoining south Andaman Sea between November 26 and December 2.

Several weather models are indicating the formation of the system with intensification into a higher category system over southeast Bay of Bengal and neighbourhood towards the end of the forecasted period of time.

“Most of the numerical models including IMD GFS, GEFS, NCUM, NEPS, ECMWF and ECMWF ensemble are indicating that a fresh LPA would form over equatorial Indian ocean & adjoining south Andaman Sea towards the later part of week 2 (26.11.2021–02.12.2021) and its intensification into a higher category system (depression or above) over southeast BoB & neighbourhood towards the end of week 2,” the IMD had said.

Is this the end of the road for Neha Bhasin and Vishal Kotian on ‘Bigg Boss 15’?

From hospital bed to Test debut, Shreyas Iyer’s journey an inspiration for many