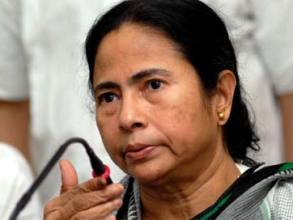 Trinamool Congress supremo Mamata Banerjee was on Friday sworn-in as West Bengal’s chief minister for the second time. Forty-one others also were sworn-in as her ministers.

Banerjee was administered the oath of office and secrecy by Governor Keshari Nath Tripathi before a galaxy of political leaders and thousands of common people at the Indira Gandhi Sarani (Red Road).

Banerjee, the state’s eighth chief minister and the first woman to occupy the post, took her oath in Bengali.

The ministerial council has 18 fresh faces. Three of the ministers are women, seven belong to the Muslim community.

Coronavirus: Bengal to provide rice free of cost till Sept

Amit Mitra, Partha Chatterjee, Subrata Mukherjee, Sovandeb Chattopadhyay and Abanimohan Joardar were among the first group of ministers to be administered the oath of office and secrecy by the governor. The other ministers were sworn-in later in batches.

Thousands of supporters braving the intense heat assembled under the open sky to watch Didi (in Bengali elder sister, as Banerjee is fondly called) take oath, as she begins her second innings at the helm of the eastern state.

Banerjee first took over as chief minister on May 20, 2011, when she led an alliance of the Trinamool Congress, Congress and Socialist Unity Centre of India-Communist to a huge win in the state assembly polls, bringing to an end 34 years of uninterrupted Left Front rule.

In the recent assembly elections, Banerjee led the Trinamool to a landslide victory, with the party winning 211 seats — well above the two-thirds majority mark of 196 — to sweep back to power.

The Congress-Left Front alliance won only 77 seats in the 294-member house. The Bharatiya Janata Party (BJP) and the Gorkha Janmukti Morcha managed to get three seats each as Banerjee’s juggernaut rolled on. (IANS)

Dysfunctional immune system may cause malnutrition