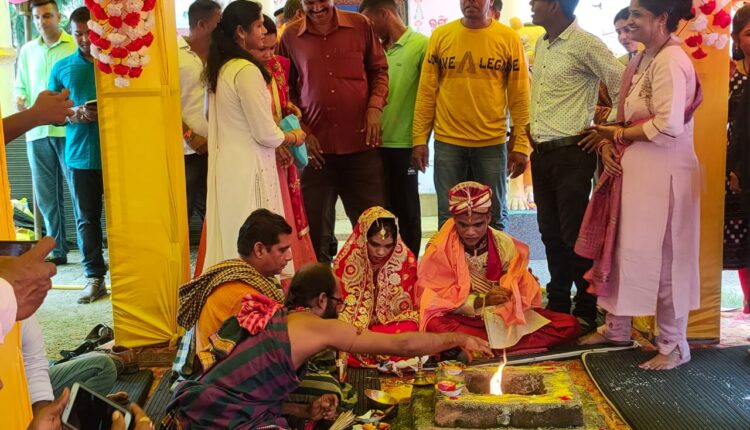 Nuapada: Two Maoist companions, who once used to subscribe to the same ideology and fight together against the society and joined the mainstream few months ago, tied the nuptial knot today.

Interestingly, Nuapada district police made all arrangements of the wedding ceremony.

A source said that the ultra couple who had earlier laid down their arms before Nuapada police is: bride Dalamati Kamar and groom Rahul Musaki. Dalamati alias Madhuri is a resident of Kundenjharia village under Sinapali police limits in the district. She had previously joined the group of red rebels named Meinpur Maoist Division (MMD) in 2016-17.

As she could not bear the brunt of mental and physical torture at ultra camps, the woman had left it and surrendered before erstwhile Nuapada Superintendent of Police in November 13, 2021.

Similarly, Rahul alias Pintu is a resident of neighbouring Chhattisgarh. He was previously working in the Kandhamal-Kalahandi-Boudh-Nayagarh (KKBN) faction of red rebels and carried a bounty of lakhs of rupees on his head. He had surrendered before Kandhamal SP in September, 2021.

After quitting the violent lifestyle, the two hardcore ultras had decided to get married.

“In order to give their (Dalamati and Rahul) wishes a concrete shape, the district police team made all arrangements of wedding ceremony. The couple got married with pomp and grandeur. Such an effort of police is being praised by people from all sections of the society,” a senior official said.