Nobel Prize for Chemistry goes to scientists from US, UK 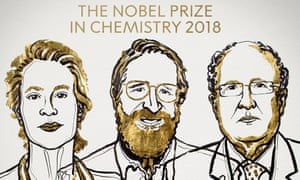 Stockholm: Frances H. Arnold and George P. Smith from the US and Sir Gregory P. Winter from the UK were on Wednesday awarded the Nobel Prize in Chemistry.

“The Royal Swedish Academy of Sciences has decided to award the #NobelPrize in Chemistry 2018 with one half to Frances H. Arnold and the other half jointly to George P. Smith and Sir Gregory P. Winter,” the award-giving body said in a tweet on Wednesday.

“This year’s Chemistry Laureates have taken control of evolution and used the same principles — genetic change and selection — to develop proteins that solve humankind’s chemical problems,” it added. (IANS)

Cong to launch ‘Jana Sampark Abhiyan’ in Odisha from tomorrow

Justice Ranjan Gogoi sworn in as Chief Justice of India