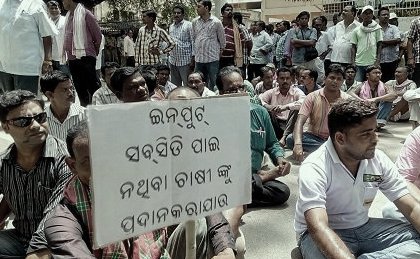 Farmers of western Odisha today staged demonstrations in front of the 10 collectorates for fulfilment of a five-point charter of demand. The farmers under the banner of Paschim Odisha Krushak Sangathan Samanwaya Samiti (POKSSS), an outfit fighting for western Odisha farmers, submitted a memorandum addressing the Chief Minister.

The Samiti demanded withdrawal of Aadhaar card criteria mandatory for paddy procurement and disbursement of input subsidy to drought-hit farmers besides fulfilment of long-standing demands failing which it will launch civil disobedience movement, it warned.

Members of the organization came down heavily on the state government at the demonstration staged in front of Sambalpur district collector’s office for not fulfilling their demands.

Neither the farmers have benefitted from the crop insurance nor input subsidy to the drought-affected farmers last year. The Chief Minister had announced Rs 100 per quintal drought assistance at Sohela but that has not been released yet, he concluded.