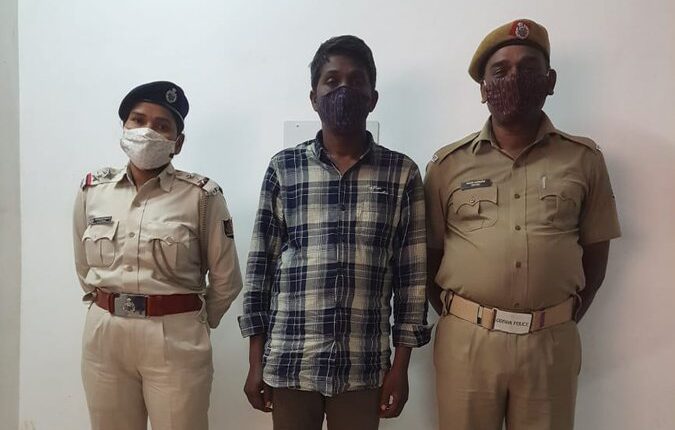 Koraput: The district police arrested a former employee of the State Bank of India, Laxmipur branch in Koraput on charges of burgling gold jewellery of more than 1.5 kg from the bank.

Koraput SP Varun Guntupalli said the former employee of SBI, Laxmipur branch, Sekhar Kuldeep, hid in a room of the bank on November 30 afternoon on the pretext of some work. Unaware of Kuleep’s presence in the bank’s room, employees of SBI, Laxmipur branch downed the shutter after banking hours. Kuldeep came out of the hideout and went to the branch manager’s room to get the strong room and locker keys. He then took away the gold jewellery kept in the strong room and locker, and again hid inside the bank’s room.

The next day when the bank reopened, Kuldeep managed to escape the spot along with the gold jewellery after one hour, Guntupalli stated.

On basis of a complaint filed by the bank’s Branch Manager alleging that Rs 1.61 kg of gold jewellery have been burgled from the bank, the Laxmipur police launched an investigation. The scientific team and dog squad also assisted the police in the probe, the Koraput SP added.

During examination of the footage of CCTVs installed at SBI, Laxmipur branch, it was found out that Kuldeep stole the gold jewellery from the bank.

As Kuldeep, who hails from Narayanpatna, worked as a messenger at the SBI, Laxmipur branch from 2014 to 2020, he was well aware of the bank’s functions and timings. Due to Kuldeep’s involvement in irregularities, the bank had disengaged him, the SP informed.

During raid at Kuldeep’s house today, the Laxmipur police seized 1kg 189gms of gold ornaments and cash of Rs 2,95,000. Following the recoveries, Kuldeep was arrested.

The SP added investigation is on to recovery the rest quantity of the gold ornaments stolen from the bank.