Odisha Hockey World Cup 2023: 8 players to look out for 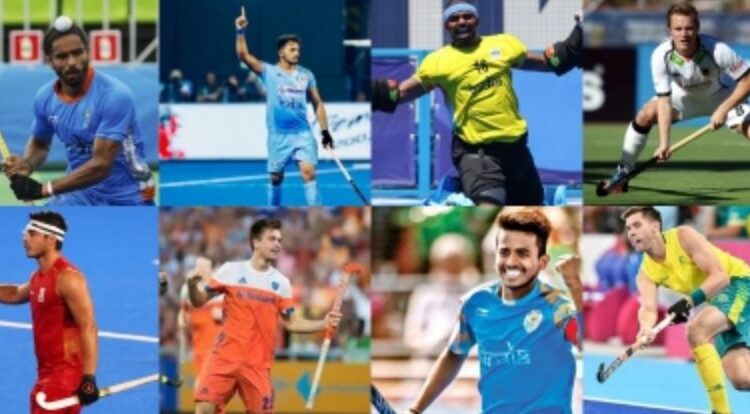 New Delhi: A galaxy of hockey stars have reached Odisha, for the mega hockey extravaganza, the most prestigious tournament of the year — the 15th FIH Men’s World Cup 2023, to be played in Bhubaneswar and Rourkela, from January 13-29.

For the first time, the FIH Men’s World Cup will be hosted by a nation twice in a row as the 2018 edition was hosted in Bhubaneswar with Belgium beating the Netherlands to win their maiden title.

As the 16 best teams from across the world gear up for the prestigious event, here’s a look at some of the players to watch out for at the mega event:

PR Sreejesh, the veteran Indian goalkeeper, has played a crucial role in India’s performance. He was also adjudged FIH Goalkeeper of the Year in 2022. He has cemented his pace among the world’s best goalkeepers for his quality instincts that make him effective in penalty shoot-out situations.

During the 2020 Tokyo Olympics, Sreejesh saved a penalty corner in the last few seconds in the bronze medal match against Germany as India ended a four-decade drought for an Olympic medal. There are many more instances where the star goalie has been a vital cog in India’s success.

Sreejesh’s presence as a goalkeeper as well as a mentor, helped the team reach the third spot in FIH World Rankings, which is the country’s best-ever standing.

The presence of a triple Olympian, who has over 240 international appearances, will be a major boost for the Indian side in the World Cup 2023. This will probably be Sreejesh’s last World Cup, it would be exciting to watch the wall of Indian hockey showcasing his finest skills in front of home fans.

The leading drag-flicker of the team, Harmanpreet Singh is touted as a vital cog in Indian hockey’s resurgence in recent years. The penalty corner specialist’s powerful flicks, along with his world-class defence have earned Harmanpreet plenty of recognition.

Harmanpreet played a crucial role in India’s historic bronze medal win at the Tokyo Olympics in 2021. He finished as the country’s top scorer in Tokyo Olympics with six goals to his kitty. It was Harmanpreet who pulled India level with Germany in the bronze medal match, before Rupinder Pal Singh and Simranjeet Singh’s goals guided India to their 12th medal at the Olympics.

Since making his debut in 2012, Akashdeep Singh has been India’s goal-scoring machine. Besides Sreejesh and Harmanpreet, he is the only player to have over 200 international caps. He has over 80 international goals under his belt. He will be the most experienced forward in the Indian lineup and a lot will depend on him to marshal the Indian forward line.

In the 2014 FIH Hockey World Cup in Hague, the 28-year-old was India’s top scorer with five goals to his name. After missing the bus to Tokyo in 2020 due to his dipping form, Akashdeep has added various dimensions to his brilliant skill sets.

In the five-match Test against Australia in 2022, Akashdeep scored a hat-trick in India’s 5-4 defeat in the opening match and a winning goal in the third match that helped India break a 12-match winless streak against the world No. 1 Australian side.

Vivek Sagar Prasad has been at the forefront of the team at different stages. The midfielder was a part of the senior squad that won the bronze medal at Tokyo 2020 and had also led the U-21 team to a third-place finish in the seventh edition of the Sultan of Johor Cup in Malaysia.

Making his return to the squad after missing out pm the recent tour of Australia and the FIH Hockey Pro League due to an ankle injury, the promising youngster will prove to be a major threat to the opposition team with his defence-splitting passes.

The midfielder was also part of the bronze-winning Australian team at the 2008 and 2012 Olympics. Ockenden not just helped out the midfielders and forwards in creating goal-scoring opportunities but also scored 72 international goals. He was part of the national team that won the 2010 World Cup and 2014 World Cup at New Delhi and The Hague respectively.

Ockenden has made as many as nine Champions Trophy appearances for Australia and helped his team clinch the gold medal twice in 2009 and 2011.

The 25-year-old holds vast experience as he has played the most number of internationals at the senior level for Australia. Ockenden has been featured in four consecutive Olympics, which include a silver (2020) and two bronze medals (2008, 2012).

Belgium’s star defender Alexander Hendrickx played a crucial role in taking Belgium to the country’s first-ever Olympic title in hockey at Tokyo 2020. He scored 14 goals and finish the campaign as the tournament’s top scorer.

He was named tied with Australia’s Grovers Blake as the tournament’s highest goal-scorer in the 2018 World Cup with seven goals under his belt. The 29-year-old king of drag-flick has 150 senior international appearances and has scored 89 goals so far.

The 30-year-old midfielder has played a total of 161 matches and scored 51 goals. Grambusch will be featured in his third World Cup. He also won Olympic bronze in Rio, and a few European Championships medals, but was not yet on the podium at the Worlds. Make it a third time a charm the 30-year-old captain will be aiming to be on the podium in India.

Thierry Brinkman has 140 caps to his name. He has scored 55 goals so far for the Dutch side. Brinkman was also named in the 2018 World Cup squad and had featured in every match. Moreover, he scored in every single match he played in the 2018 edition but the Netherlands, however, lost to Belgium in the final. The 27-year-old striker would be looking to complete what was left unfinished in 2018.