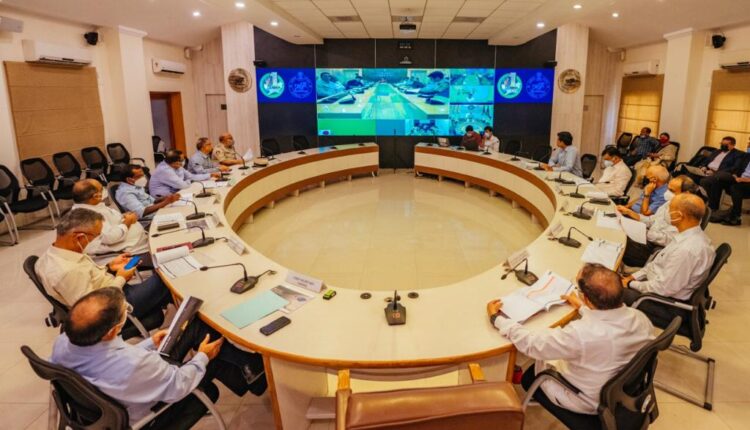 Bhubaneswar: Odisha government fired all engines today to ensure successful hosting of Hockey Men’s World Cup in 2023. A high level preparatory meeting was held here under the chairmanship of Chief Minister Naveen Patnaik to make it a spectacular event.

The Chief Minister’s Office (CMO) said that Odisha is moving into top gear to set global benchmarks for the upcoming Men’s Hockey World Cup tournament in 2023. The state is hosting the event for the second time in a row after its massive success in Hockey Men’s World Cup of 2018. The Asian Athletics Championship in 2017 was also a resounding success.

“In a few months from now the State will once again host the Hockey Men’s World Cup in 2023. In order to ensure that the marquee event is even bigger and better than its previous edition, a meeting at the level of CMO involving top government officials including Chief Secretary Suresh Chandra Mahapatra, Private Secretary to Chief Minister (5T) V K Pandian, Principal Secretaries and the Heads of different Departments was held at Lok Seva Bhawan in Bhubaneswar today. Several senior officials from Cuttack and Rourkela administrations joined in through video conferencing,” the CMO stated.

Chief Secretary Mahapatra emphasised on the challenges of the event as it will be held in two cities at the same time. He added saying, “We are confident of ensuring a smooth, successful and memorable World Cup event for players, officials, fans and spectators. We are eagerly looking forward to welcoming the top teams of the world.”

“There are certain areas that need special attention of the State government and we will be reviewing the developments periodically,” the Chief Secretary stressed.

“Different government Departments have already worked seamlessly and efficiently and executed an exceptional event in 2018 that made a global impact on our image and the same has been asked of them for this edition too. In fact, we are hoping to better the last one by adding new aspects to draw in more crowds, engage fans and also positively impress the visiting tourists,” Mahapatra added.

Sharing his views, the 5T Secretary Pandian said that it is a matter of great pride that Odisha has got the opportunity to host the consecutive edition of Men’s Hockey World Cup in 2023, that too at two different venues. “This has never happened before and we should be extremely proud of this. Odisha has set a benchmark in hosting international events,” the 5T Secretary expressed.

Pandian added, “Hon’ble Chief Minister has directed us to use this Hockey World Cup as an opportunity to showcase not only Odisha’s capability as a remarkable host but also the art, culture and heritage of the State.”

The 5T Secretary also encouraged all Department heads to come together and ensure players and fans have a memorable experience and return as brand ambassadors.

Sports Secretary R Vineel Krishna presented a road map for the mega event. He emphasised that the construction of infrastructure and facilities in co-host city, Rourkela, is going on in full swing and the development is being monitored closely, which will be ready in the coming months.

Other aspects relating to the upgradation and beautification of Rourkela City has been keenly taken up by Sundargarh district Administration. In Bhubaneswar, new turfs were laid at Kalinga Hockey Stadium few months ago and the stadium is now ready for upcoming matches.

Notably, for overall smooth and successful hosting of the World Cup both in Bhubaneswar and Rourkela, requirements, roles and responsibilities for different areas including Security, Fire Safety, Transport, Connectivity, Accommodation, Tourism, Information & Technology, Finance, Public Works amongst others were discussed.