Odisha: Miscreants attack woman with blade, attempt to set her on fire 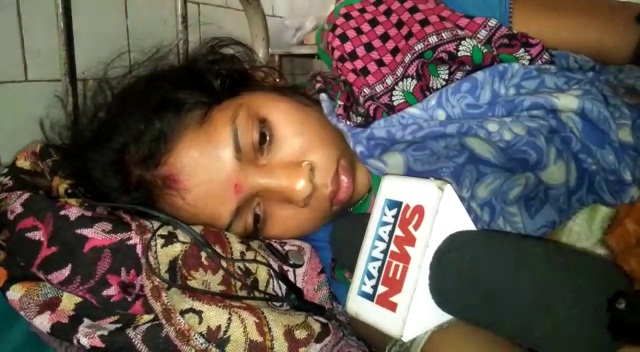 Soro: A married woman was allegedly attacked by two miscreants with blade and attempted to set her on fire here in Odisha’s Balasore district on Friday night.

The victim identified as Manjulata Jena, a resident of Banisia village under Soro police limits in Balasore district. She was admitted to the Soro CHC in critical condition.

The miscreants fled from the spot after the incident.

According to reports, Manjulata was attacked by two miscreants, who were in the masks, while she was going to attend Nature’s call last night. Finding her alone, the miscreants first attacked her with a sharp blade.

They were trying to set her on fire by pouring kerosene on her body. However, they could not execute their plan as one of them fell on the ground. They managed to flee before the victim’s husband and family members reached the spot.

Following a complaint from the victim’s family, the Soro police initiated a probe into the incident.

The family suspected that Manjulata was attacked allegedly over past enmity.

“While I was outside the home to attend Nature’s call, I felt someone is there behind me. Assuming him as my husband, I asked him to stand outside. When I came back, someone held my face tightly and hit my head on the concrete wall repeatedly. He dragged me and attacked me with a blade. He made me drink something. While they were setting me on fire after pouring kerosene on my body, someone’s leg slipped and he fell down,” the victim said.

She suspected her father-in-law’s younger brother behind the attack.

“Two people attacked her and tried to burn her. However, one of them fell down and they fled. After she knocked the door from outside, I and my son rushed to rescue her following which she fell unconscious,” said the victim’s mother-in-law Basanti Jena.