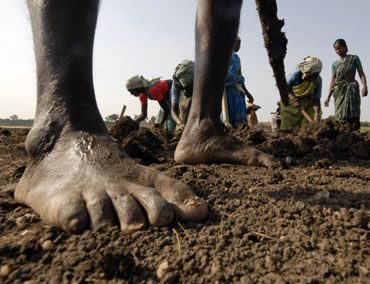 Nuapada: A tribal worker from Odisha’s Nuapada district returned his homeland as the physically challenged after five years following an accident and ill treatment by employer and brokers in neighbouring state Andhra Pradesh.

The victim was identified as Kansari Khamari of Paenr village under Komna block.

According to reports, Kansari was hired by some brokers of Chhatakhutalmunda and Mukalimunda villages to work as the labourer in Andhra Pradesh, where he was seriously injured during work.

Kansari alleged his employer of pushing him from the construction site.

The employer had asked the brokers by offering them Rs 1.50 lakh to deport Kansari at his home in Odisha. He was brought back by the brokers from Andhra and kept at a village under Komna block where he underwent traditional treatment for over two years. After he recovered partially, the brokers left him near Komna and fled the spot.

The incident came to fore after the kin of Kansari spotted him in Komna and brought him to home.

Kansari alleged that he is not able to move properly as his two legs are not functioning.

Pakistan can upset any team on their day: Virat Kohli