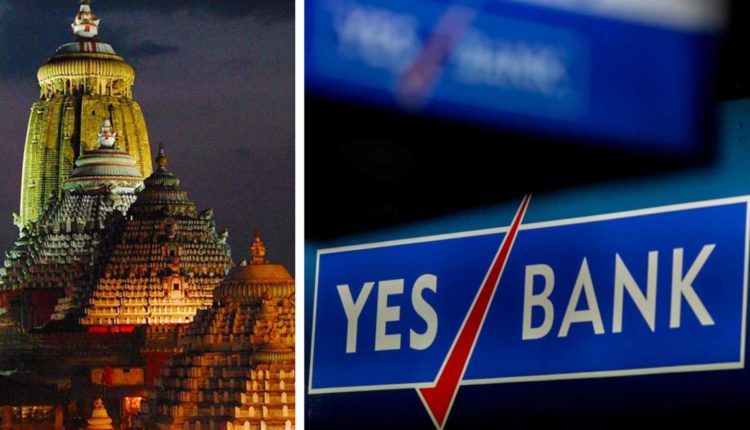 Bhubaneswar: A day after the Reserve Bank of India (RBI) placed Yes Bank under the moratorium and fixed withdrawal limit, a big concern was raised over safety of Puri Jagannath Temple funds deposited in the cash-strapped bank.

The huge financial crisis in the private bank triggered fear among the servitors and devotees of Lord Jagannath putting the fate of Rs 545 crore Srimandir funds in uncertainty.

Expressing anguish over the issue, the devotees opined that the centuries old shrine’s money should not have been kept in a private bank.

Reacting on the matter, former MLA from Puri, Maheswar Mohanty termed the deposit in Yes Bank as a ‘mistake’ and held Shree Jagannath Temple Administration (SJTA) responsible for it.

“The SJTA had deposited Srimandir’s funds in the private bank to get more interest rate. In view of the crisis, the temple administration should take initiative to bring back deposits from that bank and keep it safe in a nationalised bank by consulting with the RBI,” Mohanty said.

Clearing the air on the issue, Law Minister Pratap Jena said that the deposits of Lord Jagannath were safe in the bank. The money will be transferred to a nationalised bank after maturity of the deposits on March 16 and 29.

“The amount deposited in Yes Bank was in form of fixed deposits. The Managing Committee of SJTA has decided to transfer the money to a nationalised bank after the deposits mature this month,” Jena told mediapersons today.

Earlier in the day, the RBI assured the depositors that there will be no loss to any depositor of Yes Bank.

“The central bank has a scheme to revive the beleaguered lender,” said RBI Governor Shaktikanta Das.

Worth mentioning, the RBI on Thursday superseded the Yes Bank’s board for a period of 30 days and imposed a restriction limiting withdrawal of Rs 50,000 on its account holders till April 3.

During the moratorium period, Yes Bank will not be allowed to grant or renew any loan and make any investment. However, it can make certain expenses like salaries of employees.

The RBI said that the bank faced financial crisis as it failed to raise capital to address loan losses which resulted in decline in its ratings and invocation of bond covenants by investors and withdrawal of deposits.