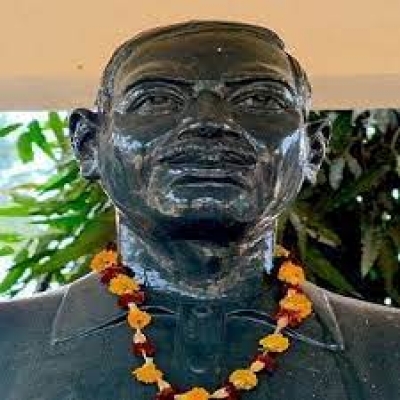 New Delhi: India attained freedom from the British Raj after a ceaseless struggle spanning around 200 years and sacrificing lakhs of its brave sons.

Some bravehearts, however, got their due recognition while several others were left in almost complete oblivion. Odisha-born Shaheed Laxman Nayak is one such freedom fighter who has been unfortunately forgotten by the current generation.

Laxman Nayak, popularly called Gandhi of Malkangiri, was born into a family of Bhumiya tribe on November 22, 1899 in Boipariguda block’s Tentuligumma village in Koraput district. Laxman’s father, Padlam Nayak, was a ‘Mustadaar’, or tax collector, and king’s representative in the village, under the local chieftain of Jeypore.

Laxman spent his childhood days playing, hunting and swimming with his friends. He never believed in casteism and untouchability. Even though the people from his tribe were not allowed to eat with the Domb community, he would often eat with his best friend Bhalu Domb without caring about receiving backlash from his father.

Tentuligumma, situated near Kolab River, was a remote village with no schools or hospitals and almost every villager was illiterate. However, Laxman’s father taught him to read and write.

At the age of 19, he got married to Ghasiram Bhuimia’s 17-year-old daughter, Manguli, from nearby Sanagumma village. The couple was blessed with a son, Raghunath, and daughter, Kaushalya, within a few years.

However, Laxman’s heart could never be at peace seeing the atrocities on poor tribal villagers by the police and officers of the local chieftain.

The kings lived a lavish lifestyle by extracting money from the poor people through heavy taxes. They also forced the poor and vulnerable tribals to work in their palaces, fields for free.

With the passage of time, Laxman mastered the art of tribal witchcraft, herbal medicine and started working as a “dishari” (tribal priest). He also learnt to use a gun from one of his friends, Chandrakutia, of Koya trib

Laxman was appointed as ‘Mustadar’ after his father’s death in 1930. As the village chief, he always stood by his people in every tragedy or difficult situation. His popularity also grew considerably as people from his and neighbouring villages often sought his help to cure diseases and perform puja

Meanwhile, he came in contact with a noted Congress worker, Nilkantha Patra, from Koraput district’s Baipariguda. The Gandhian non-violence policy influenced Laxman so much that he strictly started following all his principles in every sphere of his life.

He also learnt spinning after joining the Congress-run training centre at Nuaput village near Jeypore in 1937. Due to Laxman’s popularity, hundreds of tribals in Matili and surrounding areas, had also joined the Congress between 1941 and 1942.

When Laxman received the news of Mahatma Gandhi’s call for nationwide peaceful agitations before government offices under the Quit India Movement, on August 21, 1942, he, along with 400 tribal people, conducted a peaceful agitation in front of Mathili Police station, and refused to obey their prohibitory orders.

When the agitators tried to unfurl the national flag at Mathili Police station, the officials opened fire at the Congress workers, killing Satyagrahis and severely injuring several others. Laxman also sustained grievous injuries.

The cops not only beat him up brutally but also burned his moustache, post which, Laxman fell unconscious.

He gained consciousness after long hours and walked 51 kms to Jaypore where he stayed at the house of a Congress worker. He went to Ramgiri hills later, to escape the police, but soon returned to his village when he heard about the brutal attacks by police on the villagers.

Upon his return on September 2, 1942, the sleuths arrested him. He was later falsely implicated in the murder case of Forest Guard, G. Ramayya, who was deployed at Mathili Police station to drive away the demonstrators.

Even though, Laxman told the court that Ramayya succumbed to the bullet injuries sustained during police firing, V. Ramanathan, additional sessions judge, Koraput, solely relying on the false police version, held Laxman guilty of instigating people for arson, riots and beating Ramayya to death during the demonstration. He was given a death sentence by the judge under 302 of the IPC.