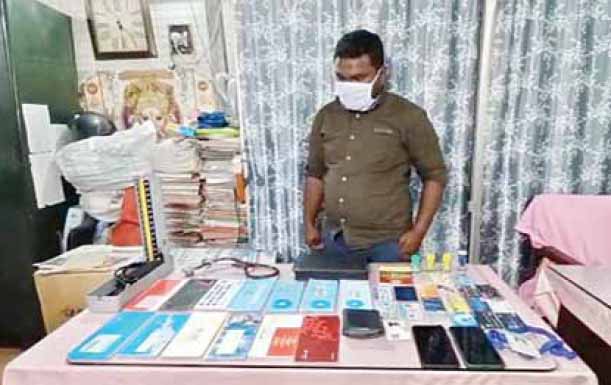 Bhubaneswar: A youth impersonating himself as a doctor duped several banks of around Rs 44 lakh in Twin City Bhubaneswar and Cuttack within a period of two years.

The accused has been identified as Sridhar Rout (27), a resident of Gopalpur area under Sadar Police Station, Cuttack.

According to reports, Sridhar had traveled to Ukraine with help of a Bhubaneswar-based consultancy firm for study in medical science in 2017. A year after his enrolment in a medical college in Ukraine, he was terminated from the institution in 2018 and he had to return to Odisha before completion of his 5 and a-half year-doctor programme.

Based on complaints, Badambadi Police initiated a probe and found that Sridhar had submitted fake PAN, ID cards and other relevant credentials to take loan from the banks. The accused was apprehended last week.

During probe into two fraud cases in Cuttack, police had verified his educational certificates and came to know that he had studied Plus II at a college in Uttar Pradesh.

Following seizure of fake salary slips from the accused, the investigation is underway to ascertain a gang allegedly involved in preparation of forged documents.

Another doctor tests positive for COVID-19 in Odisha’s…