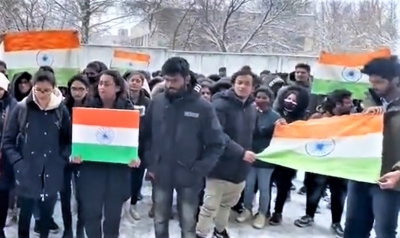 New Delhi: The Indian government on Tuesday said that all 694 Indian students stuck in Ukraine’s Sumy have left the city through a humanitarian corridor provided by the Ukrainian government.

Union Minister Hardeep Singh Puri also confirmed that the process of evacuation of stranded Indian students in Sumy and they have been taken to Poltava by buses.

Puri also said that last night, he checked with the control room set up in the Ministry of External Affairs and that only 694 students were left in the city.

Ministry of External Affairs spokesperson Arindam Bagchi said that they had apprehensions but their mission to evacuate Indian students was successful.

“Happy to inform that we have been able to move out all Indian students from Sumy,” he tweeted.

The Indian students were first taken to Poltava, from where they boarded trains to western Ukraine, and were finally airlifted.

Union Minister Kiren Rijiju also said all the students from Sumy were taken out.

“It was very worrying but finally all Indian students from Sumy have been taken out. The intervention from the highest level & effective coordination of the team at the ground have saved our young students,” he said in a tweet.

The development came a day after Prime Minister Narendra Modi spoke to the Presidents of Ukraine and Russia to provide a safe passage to evacuate remaining Indian students who were stuck in Sumy. The humanitarian corridor was provided on Tuesday morning from 10 a.m.

The Ukrainian government announced the ceasefire to provide a humanitarian corridor for the evacuation of the stranded foreign nationals to return to their countries.

The government also said that over 17,100 Indian nationals have been brought back to India from the neighbouring countries of Ukraine so far.

Officials also informed that the two Union Ministers and Special Envoys, Puri and Gen V.K. Singh (retd) have returned to New Delhi from Poland and Hungary, while the other two Union Ministers Rijiju and Jyotiraditya Scindia are still there in Slovakia and Romania.

US bans all oil and gas imports from Russia