Bank official, wife killed in road mishap while returning to village in Odisha to celebrate Pongal 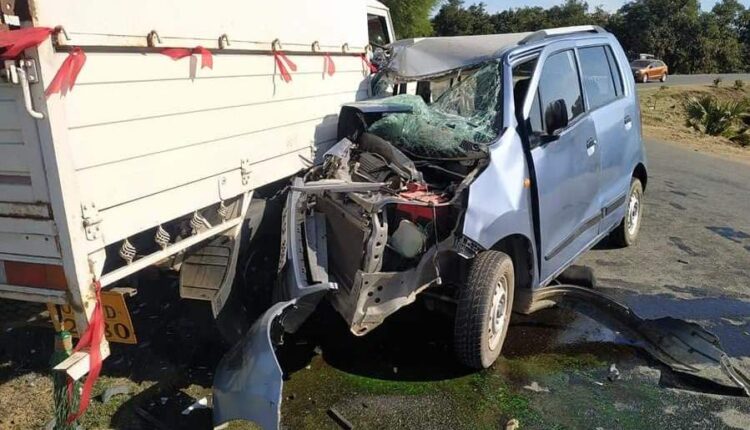 Tentulikhunti: In a tragic incident, a man working as a bank Manager in Vijayawada of Andhra Pradesh state and wife were killed and son injured in a road accident today near Chintur while returning to ancestral village in Odisha’s Nabarangpur district to celebrate Pongal.

The deceased were identified as B. Satyanarayan (55) from Bhanja Sahi of Tentulikhunti village, who was working as a Manager at Punjab National Bank in Vijayawada, and wife B. Arati (50).

Satyanarayan along with wife Arati and son B. Tusar Kumar was returning to his ancestral village Tentulikhunti in a WagonR vehicle from Vijayawada to celebrate Pongal. While Satyanarayan was driving and his wife was sitting in the front seat, Tusar Kumar was in the behind seat.

As per latest reports, Arati succumbed to injuries while undergoing treatment at the Bhadrachalam hospital. Condition of Tusar Kumar is stated to be stable.

After being informed by some political leaders, Kalimela Tahsildar Alok Kumar Anugulia visited the hospital in the neighbuoring state to inquire about the condition of the injured. He informed that after post mortem tomorrow, the bodies will be handed over to family members of the deceased.