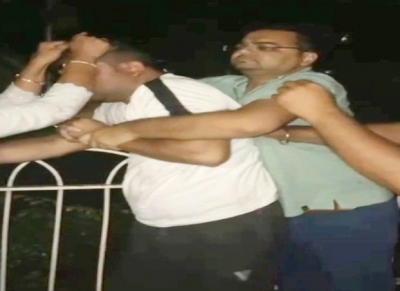 Kanpur (Uttar Pradesh): In a shocking case, a BJP leader was caught by his wife when he was in his car with a female friend.

The BJP leader, Mohit Sonkar, a secretary in the Bundelkhand region, was thrashed by his wife, mother-in-law, and other in-laws with slippers in the middle of the road.

Along with this, the woman friend was also beaten up by her businessman husband and the wife of the BJP leader.

Sonkar’s wife made a video of the incident and made it viral on social media.

Moni Sonkar, wife of the BJP leader, and the business husband of the woman have filed a complaint at the Juhi police station.

ACP Babupurwa, Alok Singh, said that the FIR will be registered after proper investigations in the matter.