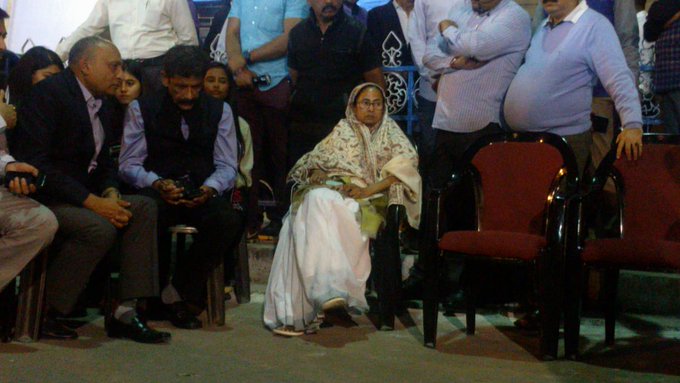 Kolkata: In a virtual no-holds-barred clash between Prime Minister Narendra Modi-led Central and West Bengal governments, Chief Minister Mamata Banerjee began a sit-in here on Sunday accusing the Centre of attempting a coup to destabilise the state after an ugly face-off between the CBI and the state police over the federal probe agency’s bid to grill city police commissioner Rajeev Kumar in connection with the Ponzi scheme scam case.

It all began around 6 p.m., when CBI officers, led by its deputy superintendent Tathagata Bardhan, were spotted near Kumar’s residence, but within a few minutes some senior Kolkata police officers rushed there and were seen having animated discussions with the federal team.

A little later, another CBI team reached the spot. Meanwhile, a strong city police team was seen near the CBI’s state headquarters at CGO Complex in the Salt Lake area. However, they left after a couple of hours.

The drama intensified near Kumar’s residence around 7 p.m., as three deputy commissioners of city police and some officers of the anti-rowdy section reached the spot, following which there ensued a scuffle between the CBI team and cops.

The five CBI officers including Bardhan were bundled into three vehicles and taken to the Shakespeare Sarani police station. They were released later in the night. CBI Joint Director Pankaj Srivastava said his officers went to Kumar’s residence to question him, but were stopped from entering the house.

Kumar, a 1989 batch IPS officer, headed the Special Investigation Team set up by the Banerjee government after the Saradha ponzi scam came to light in 2013, a year before the CBI took up the case on Supreme Court order.

The Chief Minister, who had extended support to Kumar earlier in the day, rushed to his house and was closeted with other top officers, including state police Director General Virendra.

A visibly angry Banerjee came out of Kumar’s residence after over an hour, and alleged that National Security Advisor Ajit Doval was giving instructions to the CBI at the behest of Modi and BJP President Amit Shah.

“I am sorry to say National Security Advisor Ajit Doval is giving instructions to the agency. He is implementing what PM Narendra Modi is asking for,” Banerjee said.

“I will start a dharna (sit-in) at Dharamtala area to save institutions, constitution and the federal structure of the country. This is a satyagraha,” she said.

Minutes after she began the sit-in, the police commissioner and other officers, state ministers and Trinamool leaders joined her, and scores of ruling party activists converged in the area from Kolkata and nearby districts.

“You are coming to the commissioner’s residence without any warrant to conduct a secret operation. It is (nothing but) instruction from Narendra Modi and Amit Shah.”