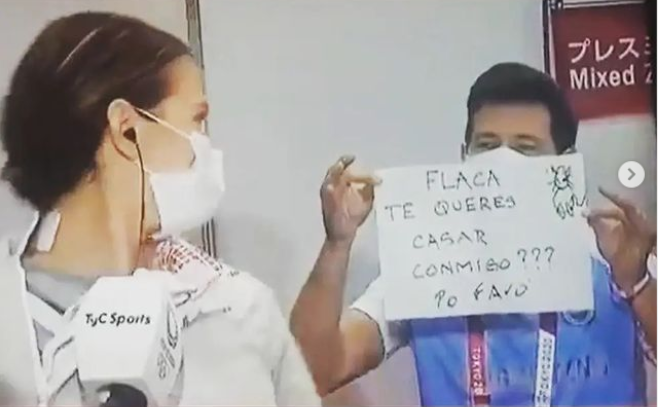 Tokyo/Bhubaneswar: The ongoing Olympics in Tokyo witnessed a marriage proposal on-air as Argentine fencer Maria Belen Perez was put on the spot by her coach and long-term partner Lucas Saucedo.

Perez exited the Olympics after losing in the first round. While addressing the media following her defeat, Saucedo appeared behind her with a piece of paper that read, “Do you want to marry me,” in Spanish.

“Tell me yes, a lot of people are looking at us,” Saucedo said going down on one knee.

This was not the first time that Saucedo had proposed to Perez at a global stage. Back in 2010, he pulled off a similar stunt at the world championships in Paris. However, it ended in disappointment for him as Perez declined the proposal by saying, “Is this a joke or what?”

Eleven years later, she said yes. The couple has been in a relationship for 17 years.

“I was speechless. I said to myself ‘Oh my God’,” said Perez. “We’re going to celebrate it in Argentina around a big asado (a traditional barbecue).”

This is not the only marriage proposal that was made at the Tokyo Olympics. On Sunday, German footballer Max Kruse asked his girlfriend to marry him live on air following his nation’s 3-2 win over Saudi Arabia.