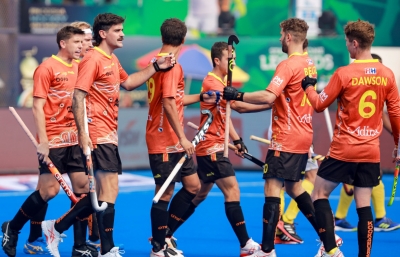 Rourkela: Rio Olympic gold medallist Argentina came back from a goal deficit thrice to hold lower-rated France to a 5-5 in a highly-entertaining clash even as Australia thrashed South Africa 9-2 to finish on top in Pool A and clinched a direct berth into the quarterfinals at the FIH Odisha Hockey Men’s World Cup 2023, here on Friday.

Australia, who started the proceedings at the Birsa Munda Hockey Stadium here on Friday as the World No. 1, rode on four goals, including a hat-trick, by seasoned Blake Govers to finish their league proceedings unbeaten with two wins and a draw.

With Australia enjoying a huge goal-difference advantage, Argentina needed to beat France by at least a 15-goal margin to overtake the Kookaburras, finish on top of the table and bag the quarterfinal berth.

Argentina started well by scoring in the 2nd minute but France came back strongly to not only level the scores in the 10th minute but after a goalless second quarter, took the lead thrice. Argentina, however, fought back every time and eventually levelled the scores 5-5 with just seconds remaining on the clock to salvage a draw.

In the first match of the day, Blake Govers set the ball rolling for Australia by scoring a field goal in the third minute. But France levelled scores soon when Ntuli Nqobile struck in the seventh minute to make it 1-1. Against the run of play, they could have taken the lead but could not capitalise on a penalty corner in the 10th minute.

Govers completed his hat-trick in the 19th minute when he scored a field goal to make it 5-1 for the Kookaburras. Jake Harvie and Daniel Beale scored in the 21st and 27th minute respectively as Australia surged to 7-1 at half-time.

They added a goal each in the third and fourth quarters through Jeremy Hayward (31st min) and Tim Brand (46th min) to take a commanding 9-1 lead. They could have added a few more goals but could not capitalise on three penalty corners and some fine attacks.

France held the upper hand in the fourth quarter as they earned three penalty corners but could score only one consolation goal in the 5th minute when Tevin Kok scored a fine field goal as the match ended 9-2 in favour of the World No.1 team.

Meanwhile, the Argentineans, who needed a big win, started the match with an early goal when Nicolas Keenan scored a field goal in the 2nd minute. But France levelled the scores within five minutes when Etienne Tyneves responded with a field goal of his own.

Both teams earned a penalty corner each in the second quarter and though Argentina enjoyed a man advantage when Matteo Desgouillons was shown the green card, they failed to score any goal and the score remained 1-1 at half-time.

France are ranked 11th while Argentina are seventh.

Charlet converted another PC in the 48th minute before Argentina equalised once again through a field goal by Ferreiro Martin to make it 4-4.

Charlet was at it once again when he converted a penalty stroke in the 59th minute and just when it looked like they had sealed a famous victory but Argentina launched a wave of attacks to force three successive penalty corners and off the third, Della-Torre scored to salvage a point for Argentina.