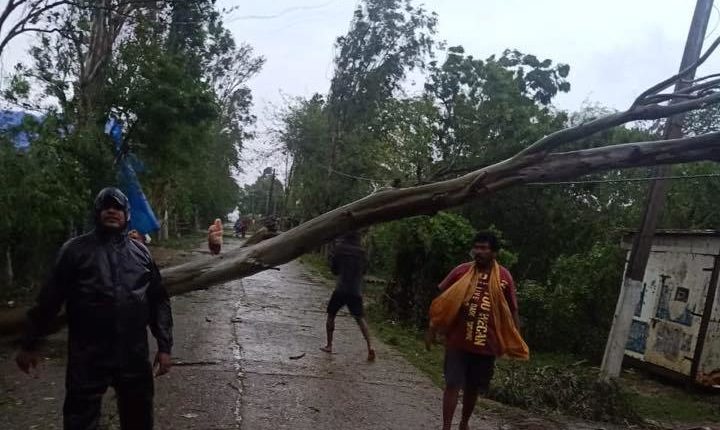 As per data, Kendrapara district recorded the highest rainfall of 75.6 mm, followed by Bhadrak with 54.6 mm, Jagatsinghpur with 51.6 mm and Balasore with 37.9 mm. On the other hand, many trees were uprooted in Paradip, Bhadrak and Rajanagar areas due to gusty wind, which affected road communication.

More than 1000 people, including 350 in Jagatsinghpur and 250 in Balasore, were evacuated last night, informed Special Relief Commissioner PK Jena. Meanwhile, wind speed of 110 Kmph was recorded in Dhamra of Bhadrak district today.

Chief Secretary Asit Tripathy, who visited the Regional Meteorological Centre here this morning to take stock of the situation, said there were no reports of  human casualties or damage to houses despite uprooting of trees.

The Very Severe Cyclonic Storm ‘Bulbul’ is being tracked by the Doppler Weather Radars at Paradip and Gopalpur in addition to other observing platforms. It is likely to cross West Bengal-Bangladesh Coasts between Sagar Islands (West Bengal) and Khepupara (Bangladesh), across Sunderban delta by late evening/night of November 9 as a Severe Cyclonic Storm with maximum sustained wind speed of 110-120 Kmph gusting to 135 Kmph, the India Meteorological Department (IMD) said.

Odisha CM appeals for harmony ahead of Ayodhya verdict