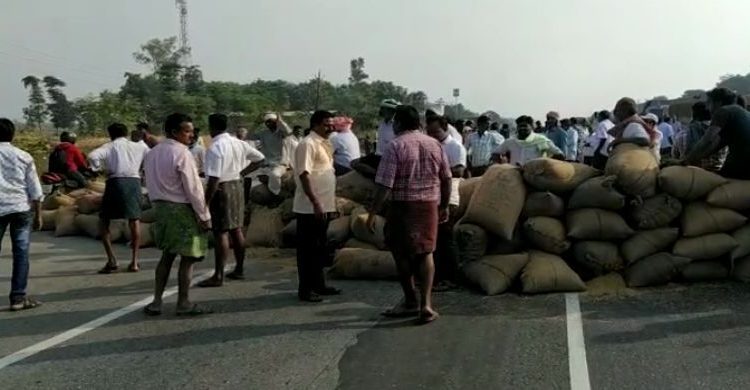 Sambalpur/Bargarh: The agitation launched by farmers in Bareipali in Sambalpur district and Godabhaga in Bargarh district protesting centralised token system for paddy procurement have been withdrawn today.

Farmers’ leader Ashok Pradhan said the protest in Sambalpur has been withdrawn after an assurance was given by Minister Susanta Singh and Rairakhol MLA Rohit Pujari to resolve the issues of peasants of Hirakud dam catchment areas.

After a discussion with agitators, Pujari informed media persons that farmers who do not have tokens can get the same within three to four hours at the mandis and participate in paddy procurement.

The minister also held talks separately with Bargarh farmers following which they called off their strike.

Earlier in the day, farmers had blocked roads by keeping paddy sacks demanding withdrawal of the token system. However, after the Minister and Rairakhol MLA intervened and held talks with the protestors, the road blockade was withdrawn and vehicular traffic movement was normalised.

Paddy procurement in western Odisha is expected to be usual from Friday.

Woman along with brother hacks husband to death in Odisha