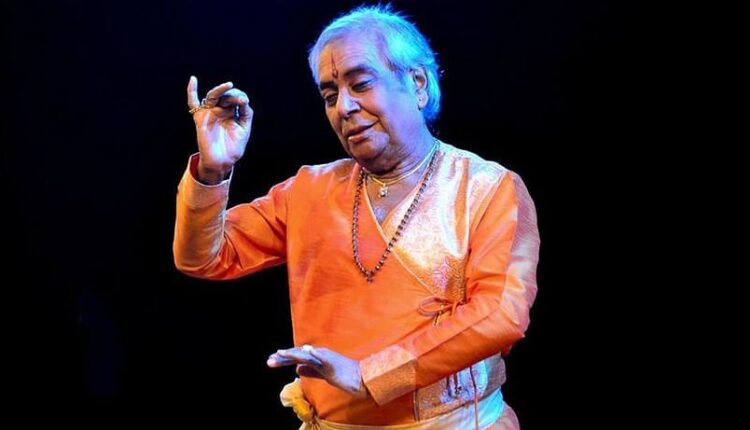 With the untimely death of Achhan Maharaj, over were the days of childhood fun and frolic, kites, cinemas and so on. The only priority for Maharajji now was to look for work, to earn money. It had become difficult to meet their everyday needs and his mother Ammaji was extremely concerned about his career and well-being.

She escorted him to all possible places where there was scope for meaningful work and a respectable income. They stayed in Kanpur for four-and-a-half years with the support of Maharajji’s eldest sister, Vidyavatiji, and he studied privately with the help of Sitaram Baglaji, an older friend. Baglaji used to teach him English while Maharajji taught him dance.

Maharajji took up two dance tuitions of twenty-five rupees each. Often he walked long distances and requested passersby to help him cross the graveyard as he was afraid to do so alone. At times his mother skipped meals as there was not enough for both and when he asked her she would say she was fine in order not to bother the child. There were days when they slept almost half-starved.

As for school, it was proving to be a big luxury for Maharajji. There was a decision by the Education Board to make vocal and instrumental music two separate subjects at the Intermediate level. At this stage Ammaji forced him to clear his school-leaving exams. When the results were declared, he excelled in both vocal and tabla. However, owing to his poor performance in English, he failed miserably on the whole.

When Maharajji was about 12 years old, he and his mother travelled to Nepal to participate in the celebrations of the marriage of the King’s nephew. Those were times when travel was not easy. Several other artistes also joined them in the hope that their works would be rewarded handsomely.

Pandit Hanuman Prasadji, Pandit Kishan Maharajji, Tara Deviji (Sitaraji’s sister) and Shri Hari Shankarji were among them. They walked for days and nights on foot, crossing several mountains—Chandragarhi, Sisagarhi, Ekdanta and Dodanta—stopping in tents for a few hours at night.

They hired a stove and a small kerosene lamp as Ammaji usually cooked ‘khichdi’. It was a life of struggle and determination that finally led to Maharajji dancing in the royal courts as well as for the women in the interiors of the palace. They loved his dance and he managed to collect a fair amount of money as well as gifts from this trip.

Around the age of 13, Maharajji, along with his mother, his Sutto Jeeya and brother-in-law, went to stay with his uncle, Lachhu Maharajji, in Mumbai. They lived with him for less than a year in Dadar. It was here that Maharajji learnt from his uncle the intricacies of his lyrical style.

His uncle also arranged for private tuitions for him in English, though it certainly was not his favourite subject. The lady who came to teach him was helpless as he wrote dance bols (rhythmic words) in place of his homework.

During his stay in Mumbai, Maharajji also enjoyed meeting cinema artistes such as Madhubala, Meena Kumari, Jeevan, Sheikh Mukhtar, Motilal, Dilip Kumar, Ashok Kumar and Kishore Kumar. Once, Maharajji was listening to a music recording at Bombay Talkies with his uncle, when he saw a young man rehearsing some lines in the adjoining room.

Maharajji found this rather funny as the man was repeating the words very fast and was acting weird. Ashok Kumar suddenly appeared and introduced the man as Kishore, his younger brother. That was probably the legendary Kishore Kumarji’s earliest audition with Shri S.K. Ojha. Even though Mumbai was good fun, the search for a proper means of earning a livelihood was bothering Maharajji.

Around 1953, Kapila Vatsyayanji, who had learnt under Achhan Maharajji and remembered young Birju, called him to Delhi to work at Sangeet Bharati — the same place where his father had taught. The job was a temporary one as he had been taken on a trial basis. The young boy was extremely excited and promised to work hard to prove his talent; it was a big boon but very challenging for him.

Along with Ammaji, they rented a small ‘barsati’ (attic) in Daryaganj from where he commuted by bus. Later they moved to Minto Road Railway Quarters, then stayed at Raja Bazar for a while, and finally shifted to a place near Hanuman Mandir. From here he walked to school at five every morning. Maharajji had his first coffee at Madras Hotel, where one of the waiters was his favourite as he showed an interest in playing the tabla.

Maharajji narrates how he once was in a hurry and forgot to carry his wallet, which he realised after drinking his coffee. He felt awkward, so he made a quick plan. He removed his jacket and threw it over his shoulders, stooped a little, squinted his eyes and made a weird face. Then slowly he moved out of the room limping on his left leg. No one really noticed. The next morning he went to the cash counter almost imitating himself from the previous day and paid the money.

(Excerpted from ‘Birju Maharaj — The Master Through My Eyes’ with the permission of the publisher, Niyogi Books, Vidushi Saswati Sen is a renowned student of Maharajji.)

COVID: Office of Odisha Human Rights Commission to be closed till Jan 25