Cuttack/Hyderabad: Bodies of the Odia couple from Cuttack city, who were killed late Monday night among eight persons in major incident of blaze that took place at a lodge named ‘Ruby Luxury Pride’ located in Secunderabad of Telangana, reached their hometown today afternoon.

The bodies were taken later in the day to Swargadwar in Puri for cremation. Following the fire mishap, the bodies of young man Chandan Jethi and his wife Mitali Mohapatra Jethi from Mohantypada of Kafla Bazaar were previously kept for the time being at Gandhi Medical College in Secunderabad. 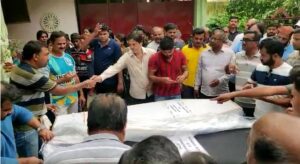 A pall of gloom descended the locality after the bodies were brought to the man’s ancestral house and hundreds of residents reached there to have a glimpse of the husband-wife duo. A number of locals including the family members and relatives bade their tearful adieu to the two deceased. 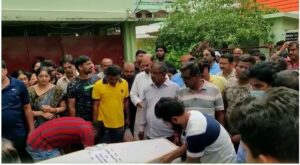 It is pertinent to mention, the man and his wife died due to asphyxiation while they were sleeping in a room of the hospitality facility. At least 10 others sustained grievous burn injuries in the inferno.

The husband and wife had got married a year ago and were previously residing in Bengaluru.

Chandan was a software engineer and Mitali was working in a company of beauty products. Recently, they had gone to Secunderabad city for the training of Mitali and both were staying in the lodge located in the same building where the fire mishap occurred, a senior police official earlier stated.

As many as three persons died on the spot due to acute asphyxiation caused by heavy smoke that spread to the entire building following the fire incident. Later, five more succumbed to their burn injuries while undergoing treatment at the health facility, the police official further said.

The major fire mishap occurred yesterday in the e-bike showroom located in the ground floor of the lodge. A number of victims are from different parts in the country. The blaze started from e-bike showroom in the cellar of the five-storied building and spread to the upstairs.